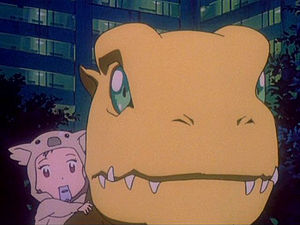 Agumon is the evolved form of Koromon, the Digimon that hatched from Yagami Hikari's DigiTama. This Agumon, which was much bigger than usual, broke out of Hikari and Taichi's bedroom and took Hikari on a ride around Hikarigaoka. When Parrotmon appears, Agumon starts fighting with it and evolves to Greymon. 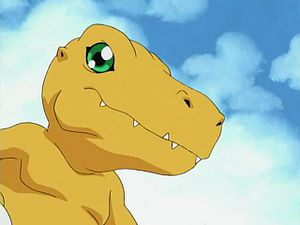 Agumon is the partner Digimon of Yagami Taichi. Koromon evolves into Agumon for the first time in "Adrift? The Island of Adventure!" to fight Kuwagamon, and Agumon remains in its default form for the rest of the two series.

Agumon is the partner of Yagami Taichi. It enters the Internet with Tentomon, Gabumon, and Patamon to exterminate Diablomon.

Agumon is the partner of Yagami Taichi. It enters the Internet with Taichi, Gabumon, and Ishida Yamato to defeat Diablomon again, and fuses with Gabumon to form Omegamon.

When Matsuda Takato is designing Guilmon in "Guilmon is Born! The Digimon that I Created", he mentions that Guilmon will be even stronger than Agumon, "the strongest of all Child Levels".

In "The Name's Dukemon! The True Ultimate Evolution", an Agumon action figure can be seen in Takato's room during a flashback.

In "The Mysterious Girl! The Bringer of Miracles, Dobermon", Agumon is one of the Digimon designs drawn by a young Keith McCoy in a video played in a news interview with his father, Rob McCoy.

When the Chosen Children visit Akiba Market in "Blizzarmon, Blow the Snow, Call the Glaciers!" and "The Jumbled Data Plan! Defend Akiba Market", some Agumon appear in the background as residents of the town.

During a flashback from Saber Leomon, several Agumon were seen to be among the Digimon who were victims to a group of humans who came into the Digital World and started mercilessly deleting Digimon ten years ago.

Agumon appears as a member of the Digimon army that Kudou Taiki leads against a mysterious army in a dream he has in "Taiki, Go to Another World!".

A trio of Agumon comprise one of the DigiMemories from the set that Taiki finds in Island Zone. Taiki uses their DigiMemory in "Fierce General Tactimon, Close In!" to hold off Ancient Volcamon, but their Triple Baby Flame doesn't have much of an effect on it. These Agumon are brought back to life along with all of the DigiMemories in "Glorious DigiXros, Seize it! Our Future!!", and are part of the Final Xros to form Shoutmon X7 Superior Mode.

Agumon is the partner of Yagami Taichi. Agumon and Taichi are among the legendary heroes called from other worlds by the Clock Maker to fight Quartzmon.

Agumon is the partner Digimon of Yagami Taichi. He is reunited with Taichi in "Reunion" when he realizes in Tokyo to protect Taichi from the Infected Kuwagamon. 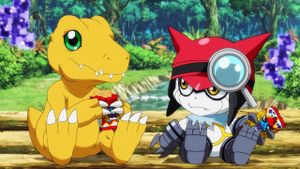 Agumon is a character in the monster-raising RPG "Digimon Universe", which Shinkai Haru played as a child.

In "Clash!? Gatchmon VS Agumon!", Haru's Agumon from his old "Digimon Universe" save file tries to stop the video game characters that Uratekumon has hypnotized and return them to their games of origin. He assists Haru and Gatchmon in fighting off the hypnotized final bosses that Uratekumon sends against them, and its friendship with Haru allows it to Warp Evolve to War Greymon.

Agumon is the partner Digimon of Yagami Taichi.

Though never seen as an Agumon, it is mentioned by Yagami Taichi that Zeromaru had evolved from an Agumon.

In "Reversal Combination", a large number of Agumon are being trained by Leo in the courtyard of Holy Angel Castle. By "Future Potential", three of these Agumon have evolved into Centalmon, Meramon, and Greymon, and are working in Hospitown as its protectors.

One Agumon is in the crowd when Tsurugi enters the battle arena.

Digimaru is the partner Digimon of Taiga.

Agumon is the partner of Yagami Taichi. Although Taichi doesn't appear, Agumon helps the Chosen Children solve the problem in Odaiba playing the role of the Yellow Dragon, Huanglongmon of the Four Holy Beasts.

An Agumon NPC serves as the Player's first opponent they have to fight against. Once the Player enters Unwavering Forest, Agumon will chase the Player to engage a battle and after it was defeated, Agumon will join to the Village of Beginnings, building and managing an Item Bank, useful to store valuable items.

Several Agumon also work for Orgemon as members of the "Bandits" that the Player has to defeat, as he's assaulted by some in the Great Canyon and are found lurking and guarding the Ogre Fortress. After the Player defeats Orgemon for the first time, the gang of Agumon will decrease by two, and finally separate from their boss when it quits its crimes to patrol the city.

Koromon evolves into Agumon after 24 in-game hours have elapsed only if its HP, MP and Offense stats are higher as opposed to Gabumon's Defense, Speed and Brains stat requirements. Agumon can also evolve into 10 different types of Digimon depending on the stats and Care Mistakes made:

Agumon spits out a fiery breath against the enemy, burning them.

Agumon is the first Digimon that Akiyama Ryo encounters, and thus the player's first available Digimon to battle with after defeating a Kuwagamon in Anode version or a Shellmon in Cathode version.

Agumon is only available in the first version of the game. It evolves from Koromon, and can evolve into Greymon, Monochromon, Tyranomon, Numemon, or Raremon.

Agumon is the mascot of the Gold Hawk Guard Tamer team and becomes the player's first Digimon if he choose to join them. It can evolve into Greymon regardless of its JP (Jogress Point). Its technique, Baby Flame, costs 8 MP and is a single-enemy Fire attribute attack.

Agumon is Yagami Taichi's Digimon. However, Taichi and Agumon were immobilized by Milleniummon when it creates a mirror site that separates the player and the others.

Agumon is an obtainable Digimon by clearing a certain Dungeon only for the first time.

Agumon is Yagami Taichi's Digimon and becomes the first playable Digimon in the game, together with V-mon and Wormmon.

Agumon is the first opponent in Beginner City's Battle Arena and Battle Cafe. The same Agumon evolves into high-leveled Digimon in the certain places.

Agumon is a unlockable Digimon. He can evolve to War Greymon.

Agumon is a unlockable Digimon owned by Yagami Taichi, which evolves to War Greymon.

Agumon is Yagami Taichi's Digimon, and joins as the playable Digimon once the player defeats Etemon. In this case, Agumon and V-mon are the only possible choices available for helping a Tamer throughout the timeline.

Agumon evolves from Koromon at level 11. Agumon may evolve to Greymon (at level 11) or Tyranomon (by Card Evolution).

Agumon is an obtainable partner Digimon. It is available in the Offensive Pack of three Digimon (along with Renamon or Koemon), or can be obtained by giving an Agumon DDNA obtained from Metal Greymon in the Asuka Server's Bulk Swamp to the Professor at the Digimon Lab.

Agumon is also a collectible card, which belongs to Red Attribute with free S-Energy Cost and 5 AP / 3 HP.

Agumon is an obtainable Digimon, which can evolve to Greymon.

Agumon is a playable Digimon.

Agumon is an unlockable Digimon. He can evolve to Greymon, who further evolves to War Greymon.

Agumon is a playable Digimon. Its Evolution Chart as follows:

Agumon is a Child-form Digimon with Vaccine Attribute, its Elemental Attribute is Fire, it is short attacker, and its families are Nature Sprits, Virus Busters and Unknown. Its skills are:

In order to obtain its Digitama, you must buy from Cash Shop, Kamemon's Digicore Shop, or defeat Greymon in Western Area: East or Server Continent Desert until it drops the Digitama. Hatching the Agumon requires 5 to 15 Dragon Chips.

Agumon is the first Digimon available for the player in the beginning of the game.

Agumon is an obtainable Digimon which is evolved from Koromon, and can evolve to Angemon, Geo Greymon, Greymon, or Growmon. It can also be obtained as a collectible card. Its card is part of the Agumon Evolution (アグモン進化 Agumon Shinka) set.

Agumon is a Dragon-race and Common Digimon.

Skills: Main Skill - Inflict a small amount of damage to one enemy. (Turns 4) Leader Skill - Restores a small portion of your HP. (Turns 5)

Agumon is one of eight playable Digimon and his partner is Yagami Taichi.

Agumon is an obtainable Digimon which is evolved from Gigimon or Koromon, and can evolve to Angemon, Birdramon, Geo Greymon, Greymon, or Tyranomon. It can also be obtained as a collectible card. Its card is part of the Agumon Evolution (アグモン進化 Agumon Shinka) set.

Agumon is unlockable Digimon. Its main evolution is War Greymon, and its Super Evolution is Omegamon. It can also be obtained as a collectible DigiCard.

Agumon is the partner Digimon of Shiramine Nokia, along with Gabumon.

Agumon can be encountered in Digital Space 11. There are special DLC versions wearing the outfits of Aiba Ami, Aiba Takumi, Yagami Taichi, and a Tower Records employee. It is also available as a Digimon Medal.

Agumon is an obtainable Digimon from the beginning of the game by selecting a Digitama which hatches Botamon. Agumon evolves from Koromon, and can evolve to Greymon, Tyranomon, Meramon, or Greymon (Blue).

Futhermore, there is also an NPC Agumon living in Oghuino wasteland that can be recruited for the city. One must battle him in order to access this area and will join the city upon defeat. Thereafter, he can be found in the central district but he doesn't provide any kind of service. Should the player set a festival (upgrading the central plaza at the bilder), Agumon will take part on it and sell various items until the end of the season.

Agumon is one of many Digimon under the caretaker Kurihara Hina, along with Gabumon and Terriermon.

Agumon is an obtainable Digimon from the beginning of the game by selecting a Digitama which hatches Botamon. Agumon evolves from Koromon, and can evolve to Greymon, Tyranomon, Meramon, or Greymon (Blue).

Agumon is the partner Digimon of Shiramine Nokia, along with Gabumon.

It is also available as a Digimon Medal.

Agumon is one of main character in the game. He became friends with Herissmon after fighting at its side.

Agumon is the partner of Momotsuka Takuma.

Agumon evolves from Koromon, and can evolve to Greymon.

Agumon evolves from Nyaromon with -2 Calls, and can evolve to Greymon, Leomon, Garurumon or Angemon.

Agumon is an enemy Digimon in Area 1 and 2.

Agumon evolves from Koromon with 0-3 Calls, and can evolve to Greymon, Garurumon, Seadramon or Numemon.

If Nature Spirits version is linked to both Deep Savers and Nightmare Soldiers versions, an Agumon route is added to all versions, and it can be raised to Agumon -Yuki no Kizuna-.

Agumon can be summoned in the Arcade component of the game by a special 20th Anniversary card.