With Black War Greymon having gave up on his quest to destroy the Holy Stones the Chosen Children set out to demolish the Dark Towers still left standing throughout the Digital World. After having destroyed several in an area they stopped for a moment to celebrate. Ken wants to invite others to a Christmas party at his home but still feels alienated by his past actions. With help from an encouraging Wormmon and a curious Daisuke he manages to get it out and they rest of the group cheerfully accept. A few of the Digimon didn't understand what Christmas was so Daisuke starts explaining it to them. Ken offers the invitation card specifically to Iori, who had been the last to accept him into the group, and to his relief Iori accepted.

Elsewhere, Yamato prepares for an upcoming Teenage-Wolves concert. One of his band members has to leave for a date but Yamato dismisses it. He gets a call from Hiroaki, his father, who tells him he won't be home because his works is making a holiday TV show.

In a restaurant, Natsuko and Daisuke's Father are thanking each other for having their sons over often while Archnemon, Mummymon, and Oikawa. Daisuke's Father leaves and Oikawa approaches Natsuko and asks if she remembered him. She remembers him asking about Hikarigaoka . He reminds her that he asked about the "Odiba Fog" case but that she never met with him. She worriedly states that she was busy at the time. She states he already researched it himself and that the case hadn't been solved yet, going so far as to say that it's only the beginning before walking away leaving her to ponder his words.

Later, on December 24, 2002, the new Chosen Children gather up the Digimon partners of the original Chosen Children to take them to the real world. Palmon worries because Mimi is in America but Hikari assures her that they can open a Digital Gate to America so Mimi can join them. They put Palmon in a bag and sent her through a Digital Gate to Mimi's home to surprise Mimi.

Ken's Mother gets off work. A co-worker mentions that Ken has changed noticing that he now answers the phone for her. At the same time the new Chosen Children gather up the origional Chosen Children and give reunite them with their Digimon partners as a Christmas presents. Later, Sora has second thoughts about giving Yamato a Christmas present but Piyomon encourages her. Taichi, Agumon, and Gabumon happens apun her. To her surprise Taichi encourages her as well. Agumon remarks that Taichi as grown up. The two narrowly avoid Jun barreling through on her way to give presets to Yamato.

Later, the new Chosen Children arrive at Ken's home. Miyako asks about Osamu and Ken reluctantly answers. Meanwhile, the original Chosen Children are the Teenage-Wolves's concert. Jun is also there over-eagerly cheering them on with palm-palms. Archnemon activates a Dark Tower outside causing ambient noises from the equipment. A portal opens up behind the band and a Dark Tyranomon and several Bakemon swarm out. Agumon tries to evolve but is unable to. They flee outside. A Monzaemon, several Numemon, Megadramon, Kuwagamon, and a Snimon are already wondering around outside causing panic.

The new Chosen Children are playing card games at Ken's home. When Miyako gives an over-exaggerated response to losing Ken laughs marking the first time any of them had seen him laugh. They get a call from Taichi and rush over to aid the others on Nefertimon, Pegasmon, Holsmon, Digmon, and Lighdramon. Under Daisuke instruction they attack and destroy the Dark Tower enabling normal evolution. This added Stingmon, Greymon, Birdramon, Garurumon, Ikkakumon, and Kabuterimon to their forces.

Greymon attacked Dark Tyranomon with Mega Flame but Dark Tyranomon blocked it with his arm and engadged Greymon in claw-on-claw combat. Hiroaki watches at a distance and his co-workers panic about this having happened three years ago. One co-workers ask if they want to listen to a sutra. Birdramon fires Meteor Wing at Megadramon but misses. They co-workers fear that the TV station will be destroyed again. Garurumon and Kabuterimon slam Kuwagamon into the ground while Snimon takes a swing at Digmon. Jun and Momoe watch the battle in awe. Monzaemon uses Lovely Attack on Lighdramon and Stingmon but they avoids it. Phantomon, and all the Bakemon and Numemon team up on Ikkakumon.

The Chosen Children see that they can't fight them all. Koushirou and Jou devise a means to returning all the wild Digimon back to the Digital World. Holsmon uses Udjat Gaze to stun Phantomon, and all the Bakemon and Numemon. Nefertimon and Pegasmon use Sanctuary Bind to ensnare them and Miyako opens a Digital Gate to return them to the Digital World.

Taichi and Daisuke tell the rest to keep going while Hikari ponders why the wild Digimon were in their world to begin with. Takeru reminds them of Qinglongmon saying that the real enemy was somewhere else. Greymon chucks Dark Tyranomon through the Digital Gate while Iori states that the effect of the Dark Towers to seal evolution vanished along with the Digimon Kaiser. Ken explains that it must be Archnemon because she can travel between the real world and Digital World while Snimon is sent back. Ken explains that he first Archnemon in the real world but thought it was a dream. Nefertimon and Birdramon use the tent to capture Kuwagamon, another Snimon, and three more Bakemon. Garurumon, Ikkakumon, and Lighdramon push them through the Digital Gate. All that remained were Megadramon and Monzaemon. Knowing they were Perfect level Digimon the new Chosen Children devolved their Digimon then re-evolved them into Paildramon, Silphymon, and Shakkoumon. Paildramon striked at Megadramon with Esgrima but Megadramon avoided it. Megadramon counterattacked with Genocide Attack but Paildramon also avoided it. Silphymon and Monzaemon's Top Gun and Lovely Attack attacks collide canceling each other out. Shakkoumon uses his Nigimitama attack distracting the two. He picks Monzaemon by the head and throws him through the Digital Gate while Paildramon grabs Megadramon by the tail and throws him in also. Exhausted, the new Chosen Children's Digimon devolve to their Baby II forms (except Tailmon who only devolved to Plotmon). Koushirou still expresses concerns about Archnemon being able to cross over between the worlds so easily.

Later, Taichi apologizes to Ken for disturbing his party. Daisuke says they'll visit again as Ken goes to his apartment. Sora remarks on how well Ken has changed. Daisuke says he hasn't noticed anything. Taichi says "that's what makes you you" to Daisuke displeasure. That night all of the Chosen Children cherish being with their Digimon partners.

The next morning, Daisuke as awoken by Jun's scream as she sees a news flash about the Dark Towers appearing around the world. Koushirou and Tentomon also discover that Digital Gates have been open all over the world. 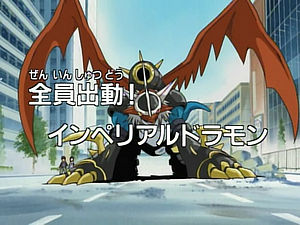