In space, astronauts on-board a space shuttle heard of the appearance of Digimon and Dark Towers on Earth, just in time to catch a glimpse of Imperialdramon at a distance. Imperialdramon continued on his way as he destroyed all Dark Towers on Earth. He dropped Taichi and Takeru off in Paris first, then Hikari and Koushirou in Hong Kong, followed by Iori and Jou in Australia and Miyako and Sora in Moscow.

Imperialdranon landed in Miami and devolved back to V-mon and Wormmon. V-mon was confused about why he devolved, and Daisuke suggests it was because of the light of Qinglongmon. Just then, Michael arrived on the scene, having arranged transportation with the help of his father. Yamato and Ken took a helicopter to Mexico, while Daisuke and Michael took a private plane to New York. Daisuke was shocked to see that the pilot of the plane, Michael's father, Michel J. Barton, was a Hollywood movie star.

In the Niagara Falls, an American Chosen Child named Tatum and her Airdramon partner directed a Tonosama Gekomon to join groups of Digimon heading to the Digital Gate in New York, much to the surprise of armed forces watching the event. The armed forces received reports that lots of monsters seem to be migrating to New York.

In New York City, Mimi has sneaked away from Keisuke and Satoe, who were fleeing the city, leaving them no more than a note. Mimi and Palmon set up lights on a street so that Daisuke and Michael's plane could land. As the children talked at a park (and Michael's father found a liking to rice balls), an aide of Gennai named Benjamin arrived. To Daisuke's surprised, Benjamin looked just like Gennai, and Benjamin explained to him that he and Gennai were once one and the same. Daisuke asked Micheal what the other American Chosen Children are like, but Michael said that he hasn't met them all himself.

At the Rockefeller Center, Sam, another American Chosen Child, ran into a problem when a Jyureimon he was leading to the Digital Gate went ballistic as a large Christmas tree lit up. Sam's partner, Flare Lizarmon, tried to hold him back, but Jyureimon effortlessly tossed Flare Lizarmon away. Desperate, Sam called for backup. Mimi received the message and alerted the others. Daisuke and V-mon rushed out to help, but Michael reminded them that they don't know where the Rockefeller Center is, much to their embarrassment. Benjamin released the light of Qinglongmon with aid from Daisuke's D-3, allowing Palmon to super evolve. Elsewhere, Keisuke and Satoe nearly ran down two police officer's while franticly searching for Mimi.

Back at the Rockefeller Center, Jyureimon has climbed a building. Flare Lizarmon tried to stop him again, but was still no match for the Perfect Digimon. Lilimon arrived and tries to use Hana no Kubikazari on him, but her attack didn't work because he wasn't under any sort of mind control. Daisuke instructed XV-mon to cool Jyureimon off, and XV-mon responded by kicking Jyureimon off the building onto the Rockefeller Center's ice rink, which wasn't really what Daisuke meant. Jyureimon retaliated by using Cherry Bomb on all the Chosen's Digimon and ensnaring them in his veins. However, three other Chosen Children arrived and help pacify Jyureimon. They introduced themselves as Lou, Maria, and Steve.

Keisuke and Satoe spotted Lilimon in the sky, recognizing her from three years ago, and tried to follow her general direction. Back at the park, Daisuke sent all of the wild Digimon back to the Digital World. Just when he was finished, Keisuke and Satoe arrived. Keisuke asked Daisuke where all the monsters went. Daisuke turned to the others for an explanation, but they didn't know what to say, so the boy played dumb, just saying Merry Christmas.

In Hong Kong, a Mojyamon rampaged in the streets. An old man attempts to exorcise it, but fails miserably. The Mojyamon tried to attack him, but the Hoi Brothers rescued him. They had their Shakomon evolve into Octmon and used their Black Sea Ink Guns to blind the Mojyamon. The Octmon then moved in to attack with their swords but, Hikari arrived carried by Angewomon alongside Koushirou riding on Atlur Kabuterimon, pleading with them not to attack any further because the Mojyamon was just a lost Digimon. The Hoi Brother didn't understand Japanese, however, and the eldest Hoi Brother attempted to communicate with them in English. However, Hikari didn't know any English, and Koushirou wasn't much better. Luckily, Jackie, another Gennai "clone", arrived to break through the language barrier and explained to the Hoi Brothers that the Digimon wasn't evil and should be returned to the Digital World at a gate in Kowloon Park. The brothers agreed, but seemed more interested in asking Hikari out on a date.

Two of the Asian Chosen Chidlren, Yuehon from China and Dien from Vietnam, herded Digimon from various places in Asia to Kowloon Park. However, Koushirou received an e-mail from Mina, an Indian Chosen Child, who couldn't enter China from India because the Chinese military was blocking the way. He, Hikari and the eldest Hoi Brother went to aid her. On meeting with Mina, Angewomon said she and Atlur Kabuterimon could be decoys to the agitated Chinese military force, but Koushirou stated that it would still be an international incident.

They then thought up a new way to communicate. They had the Hoi Brother's Octmon use its Kaimei Bokujū to write "hello" in Chinese 「你好 Ni hǎo」 on the side of a cliff. The military then had some of its troops line up to spell hello in Chinese in response. After they had an understanding, they let the Digimon cross into China, where they were returned to the Digital World. Hikari thanked the eldest Hoi Brother with a handshake, causing the other two Poi Brother to become jealous and begin fighting to shake her hand.

At the same time in Japan, Mummymon made contact with a lonely boy named Yoshizawa Takashi on the swings in a remote park, who asked Mummymon if he is all alone too... 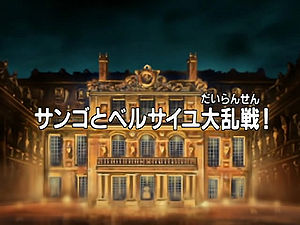