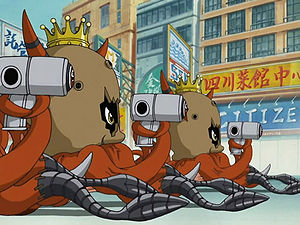 The Octmon from Digimon Adventure 02

Three Shakomon, who are the partner Digimon of three of the international Chosen Children, evolve to Octmon in ZT40.

A Octmon was among the many Digimon seen through the rip in the sky during Vikaralamon's rampage.

He is one of Neptunemon's minions in Island Zone.

Octomon is a collectable black card with 11/9 stats.

Octmon is an obtainable Virus Adult-Level Digimon and belongs to the Deep Savers Field.

A NPC Octmon in the Southern Zenith Plaza requests the Player to look after the Water Goggles it lost at Thriller Ruins, but with the preerquisite of having an Octmon with the "Prissy" personality in the Digi-Farm and already cleared out the Limit Valley.

Once the Player reaches to the Thriller Ruins and finds out the Water Goggles, the player has to find and defeat against a Bakemon, and return to the Southern Zenith Plaza to give Octmon back its Water Goggles.

Octmon is available as a Digimon Medal.

Octmon is available as a Digimon Medal.