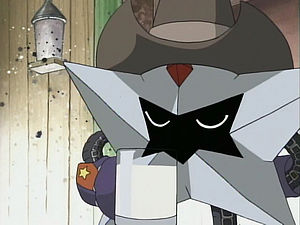 Starmon was the Sheriff of a wild western town located in the Digital World. He fell under the control of the Digimon Kaiser and captured Piyomon who was on the run from the Digimon Kaiser. He later captured Takenouchi Sora along with Motomiya Daisuke, Inoue Miyako and Hida Iori and their Partner Digimon as well. However, Revolmon appeared and let the girls out to play cards with him. Starmon having learned the truth out of Daisuke and Iori went after Revolmon and they had a duel. Starmon defeated Revolmon with Meteor Squall as Daisuke and Iori appeared riding on Lighdramon with Armadimon. Starmon's Meteor Squall took out Lighdramon but Daisuke evolved V-mon into Fladramon who attacked Starmon, sending him crashing into the Dark Tower (disguised as a hanging staircase), knocking it over and breaking his Dark Ring. He then apologised to Piyomon and played cards with everyone else.

Some Starmon lived on the one of the moons where they worked at the main facility run by Super Starmon. They helped Takuya and the others get back to the Digital World via a rocket ship.

Some Starmon are seen at Baromon's assembly.

A Starmon is one of the Digimon who cheer the heroes on in the final fight against N.E.O[35].

Starmon is an obtainable Yellow/Rare card whose stats are:

Starmon is a collectable blue card with 11/9 stats.

Starmon is a obtainable evolution of Agumon.