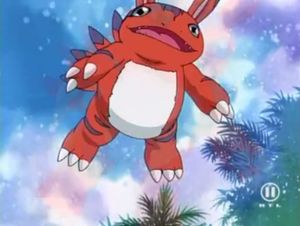 Elecmon was the guardian of the Village of Beginnings.

Another two Elecmons were victims of the Digimon Kaiser.

An Elecmon was one of the many frozen victims of Ice Devimon.

An Elecmon realized and wreaked havoc in the city by jamming signals at junctions, causing massive car crashes before evolving into Garurumon (Black).

An Elecmon was one of the digimon trapped into a balloon of Airu's Opossumon.

An Elecmon is the partner Digimon of an International Chosen Child.

A Tamer-owned Elecmon appears as part of the audience of the Battle Stage.[58]

Another Elecmon is shown as a wounded inhabitant of the destroyed Light City.[59]

An Elecmon is one of the Digimon who cheer the heroes on in the final fight against N.E.O[60].

An NPC Elecmon is found at the north west of Gear Savannah, pacing around a tree. If the Player talks to Elecmon, it will electrocute the Player's Digimon, and if the Player keeps talking to it, it will keep electrocuting the Digimon for a total of 3 times, each shock doing more damage than the other. After that Elecmon says that it was testing the Player and Digimon's braveness and will join the city. Elecmon doesn't really do anything after being recruited other than stacking up Prosperity Points and installing up recesseds in the main square of the City and illuminating it at night, serving as a mere decoration purpose.

Tunomon evolves into Elecmon after 24 in-game hours have elapsed only if its HP, Offense and Speed stats are higher as opposed to Penmon's MP, Defense and Brains stat requirements. Elecmon can also evolve into 7 different types of Digimon depending on the stats and Care Mistakes made:

Once the enemy is near contact with Elecmon, it will release sparks and electrocute the enemy.

Elecmon is a collectable White card with 2/1 stats.

Can be found at Forest of Peace. As an obtainable Digimon, evolves from Zurumon at level 11, and evolves to Leomon at level 21. There is also a mutant version which can evolve to Gryzmon.

It can be caught at Dina Plains.

Elecmon only appears in the opening animation of the game.

A young girl named Fuuka befriends an Elecmon and Numemon in Ueno and names them Ecchan (えっちゃん, Lekkie in the English version) and Nuu-kun (ぬうくん, New New in the English version), playing with them often and giving them food. Her brother, Masanori, hires Aiba as he was worried about her going out at night and states he knows she has been hanging out with dangerous people. That same night she plays with them again, though a police man and business man attempt to stop her due to being worried they would try to eat her, the trio denying this. A Cyclomon then arrives and Fuuka tries to befriend it too, though it tries to eat her. Aiba then arrives, and alongside Ecchan and Nuu-kun defend her from the Cyclomon. After killing the Cyclomon; Ecchan and Nuu-kun agree to continue being friends.

Elecmon is an enemy Digimon in Area 3.

Elecmon can evolve to Leomon.

Elecmon is an enemy Digimon.