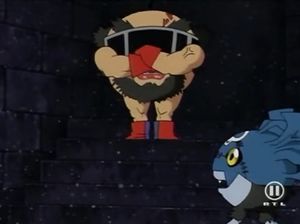 Nanimon was a minion of Vamdemon who was put in charge of training some of his army. Agumon and Palmon got past him with the help of a Numemon by getting him drunk on sake.

A Nanimon is one of the Digimon hunted by Tobari Ren.

A Nanimon is one of the Digimon who cheer the heroes on in the final fight against N.E.O[22].

Nanimon appears as an obtainable Adult-level Virus type Digimon in Digimon World. All 9 Child Digimon in the game can evolve into Nanimon when they are scolded and their Happiness and Discipline Gauges are empty. An easy way to achieve this evolution is to enter a battle with a weak enemy, like a Modoki Betamon or a Dokunemon, then instantly run away. This slightly lowers both Happiness and Discipline of the Digimon.

Nanimon's Digivolution Item are the Sunglasses, which let any Child Digimon evolve into Nanimon.

Nanimon can also be found in five different locations in the game: Orgemon's room in the Ogre Fortress after defeating him and his gang for the first time, Leomon's Ancestral Cave after giving the Saber Leomon statue to Leomon and defeating Orgemon in the Drill Tunnel for the third time, Factorial Town's Sewers after defeating and recruiting Giromon, Andromon and Numemon, Toy Mansion after defeating Waru Monzaemon, and Speedy Time Zone in the Ancient Dino Region after defeating Insekimon and recruiting Tyranomon, and will give the Player a key chain to increase his inventory size, being able to stack up 20 more items when witnessing him for the first time. After the fifth discovery of this Digimon, it will drop another keychain that can store 30 items and will join the city. Most Digimon do not know which part of the city it joined, but if you look carefully inside Village of Beginnings's Item Bank, you will see that he is hidden behind Agumon's counter in a corner, however its physically impossible to interact with it as there is no way to reach to it.

Nanimon has 3 possible evolutions depending on the stats and Care Mistakes made:

Nanimon poops in the ground, then kicks it to the enemy, hitting them.

Nanimon is an obtainable Digimon. Evolves from Gazimon (0+ DP) and can evolve to Tekkamon (0+ DP).

Nanimon appears as an opponent and an obtainable Rare Card.

Nanimon is an enemy Digimon.

Can be evolved from Goburimon if above level 20, friendship 70%, and qualities 28, or can be found at Chip Forest.

Evolves from Piyomon or Palmon when the requirements for the other evolutions are not fulfilled. Can evolve to Digitamamon.

Evolves from Patamon, Pico Devimon or Ganimon when the requirements for the other evolutions are not fulfilled. Can evolve to Etemon.