Speedy Time Zone (ダイノ古代境時急域 Daino Kodaikyou Jikyūiki) is the deeper part and the other half of Ancient Dino Region.

In the Speedy Time Zone, time passes much more quickly. This causes the environment to decay way faster, causing the environment to look very desolate and gray. The huge dinosaur bone also serve as an example of how even something that great can decay so badly that it now serves as a tunnel. Saberdraamon around the area further add to the desolate atmosphere of the Speedy Time Zone. The meteor landing site is in the deepest part of the zone, through a hidden passageway. 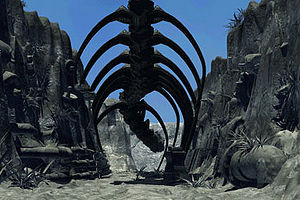 In the Speedy Time Zone, time passes twice as quickly as in other areas of File Island. Thus, Digimon require food and bathroom much more often and they age more quickly. A meteor is said to have crash-landed in the deepest part of the Speedy Time Zone. If one were to investigate and solve the problem caused by the meteor, the guardian Tyranomon of Ancient Dino Region may be convinced to join the Village of Beginnings. A Saberdramon gives travellers the advice that there is a secret passageway to the landing site of the meteor, if it is defeated. Also, if the landing site is cleared, it is said that Nanimon may wander to there as well.