Great Canyon (グレートキャニオン Gurēto Kyanion) is a canyon located on the eastern portion of File Island.

Great Canyon is a canyon with a very dry and hot weather, and can only be reached by going south from the Freezeland. However, there is a rumor that one can also reach the canyon from Tropical Jungle, by means of an Invisible Bridge. The canyon is home to many savage and wild Digimon. On the bottom of the canyon is an ancient region filled with prehistoric Digimon, which can only be reached through a mysterious forest in the Tropical Jungle. 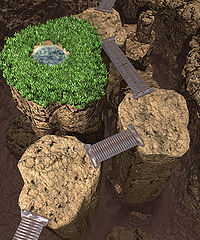 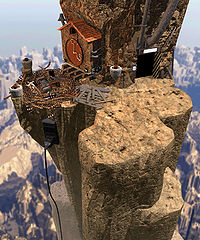 The Upper Area of Great Canyon

First introduced in "The Dancing Ghosts! Bakemon", Gomamon refers to the Great Canyon as the place where Orgemon is from, and thinks that as a result of the canyon's hot and dry environment would cause Orgemon to be weak against Gomamon's Marching Fishes attack. Gomamon's guess is soon proven to be false.

The Great Canyon can only be normally reached from Freezeland, which would be quite a journey in terms of distance and time. However, an Invisible Bridge is rumored to exist in the Tropical Jungle region directly east of the Overdell wasteland that connects to the canyon. The canyon has recently became the base of operations for a gang of Digimon led by Orgemon. It is not allowing any travelers to go through the canyon, and has built elevators and a fortress within the canyon. However, these elevators work not by shifting the elevator car up and down, but by shifting the canyon ground attached to them up and down. This has caused a Shellmon to be stuck on one of the platforms, and it would appreciate it if someone rescued it. On the highest point of Great Canyon lies a nest, which, usually unoccupied, but its owner will return upon seeing anyone who would trespass its home. Near the Invisible Bridge is a lone shop ran by a Monochromon, who serves Digimon around the area and requires some assistance in selling its products. It is said that the wandering Nanimon may be spotted deep within Ogre Fortress, as long as Orgemon has been chased out of his own lair.