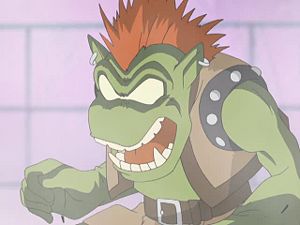 A Goburimon realized and was destroyed by Makino Ruki and Renamon after evolving into Fugamon in "You are my Friend Introducing Terriermon!".

Some Goburimon were seen outside of Ogremon and Fugamon's ramen restraurant in the DigiQuartz.

A Goburimon is listed on Himekawa Maki's computer as one of the Digimon that was reborn as a result of the reboot.

Several Goburimon served under the rival gangs led by Minidekachimon and Gaossmon in "The Villains of the Wastelands".

A group of Goburimon were shown as part of the outlaws that moved into the wastelands before the events of "The Vagrant War Demon, Rebellimon". During Cutemon's flashback they, alongside a group of Pagumon, attacked two weak Elecmon (Violet) who were unable to protect themselves.

A Goburimon attacked a Botamon who Yagami Taichi saved during Valkyrimon's test in "The Crest of Courage". Another one later joined it, but they were incapable of killing Taichi and Botamon.

A Tamer-owned Goburimon appears as one of the Digimon in the audience of the Battle Stage when Knight appeared.[73]

Another Goburimon is shown as a wounded inhabitant of the destroyed Light City.[74]

A Goburimon is one of the Digimon who cheer the heroes on in the final fight against N.E.O[75].

Goburimon is an unobtainable enemy Digimon. It can only be obtained as a collectible card. Several of them are part of Orgemon's gang and cause trouble up in the mountains.

Goburimon is an obtainable Child level, Virus Attribute, Land Type Digimon. It can be found in Piemon's Palace.

Goburimon is an obtainable Digimon. Can evolve to Orgemon (0+ DP).

Goburimon is the first opponent of Steep Road's Battle Arena. It uses the Bang Bang deck, a deck with 3 attack, 1 defense and 2 evolution speed that uses all five Specialties. It makes up for being unable to easily evolve by playing only Child-level cards alongside several attack boosting Options.

Goburimon is also an obtainable Child-level Red/Flame card whose stats are:

Goburimon is an unobtainable enemy Digimon. It is also available as a collectable red card with 2/1 stats.

Evolves from Pagumon (P) at level 11. Evolves to Ogremon at level 21.

A group of Goburimon are among the first enemies you battle after entering the Yamato Server.

Goburimon is an unobtainable enemy Digimon. It can only be obtained as a collectible card.

A Goburimon stands guard at the end of the Ancient Bone Swamp leading to Night Canyon, turning back travelers from the bottomless swamp pit. Filling the pit with rocks found around the area will lead to the truth that the pit is actually not a pit at all, and that Goburimon was just playing mischief on the travelers. Goburimon will then join the city as an apology.

Goblimon is a minor enemy Digimon. It can only be obtained as a collectible DigiCard.