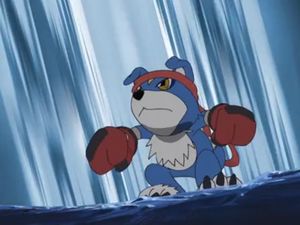 Gaomon is the partner of Thoma H. Norstein.

On the first episode, Taiki is in a dream where a mysterious army is battling against Taiki's Digimon army. Gaomon is part of that army.

Gaomon is the partner of Yuu.

Sashenka is the partner of Nicolai Petrov.

An NPC Gaomon appears along with Culumon during the beginning of the game, being chased by Goburimon at Data Forest. After Goburimon is defeated, Gaomon will give you a 100% scan data of Poyomon as gratitude of saving his life. He then later be seen at the help desk next to Agumon in DigiCentral, giving player instructions about battle. Another Gaomon can be seen alongside with Thoma from Digimon Savers during Onegai Quest.

Gaomon evolves from Tunomon with 3 after battles and evolves into Gaogamon with 6 after battles, Centalmon with 20 Beast AP or Galgomon with passing time.

It can be caught at Dina Plains.

Sashenka is the partner of Nicolai Petrov. Gaomon is also an obtainable Digimon which is evolved from Wanyamon, and can evolve to Gaogamon, Garurumon, Ikkakumon, or Leomon. It can also be obtained as a collectible card. Its card is part of the Gaomon Evolution (ガオモン進化 Gaomon Shinka) set.