The Digimon Card Game (デジモンカードゲーム Dejimon Kādo Gēmu) is a trading card game produced by Bandai, based on the Digimon franchise. It was introduced in 2020, and is currently ongoing. 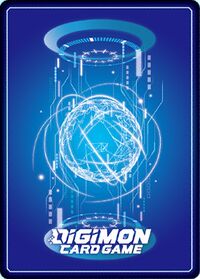 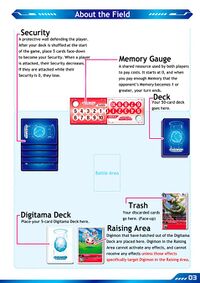 A diagram of elements on the Field.

The Field 「フィールド」 is the play area in which the card game takes place. The playing field is divided into your area 「自陣」 and the opponent's area 「敵陣」.
The Field consists of the following elements: 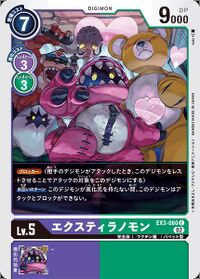 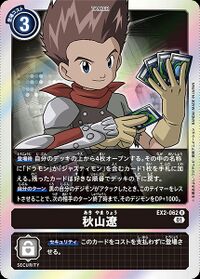 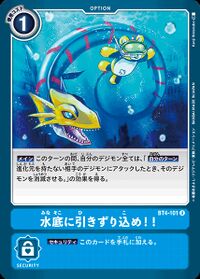 Example Option Card:
BT4-101 I'll Pull You Down to the Bottom of the Ocean!!.

After performing the Game Setup, each player will take turns performing actions, starting from the player who goes first. Each turn consists of four phases: Active Phase, Draw Phase, Raising Phase, and Main Phase, after which the turn ends.

Before the start of the game, each player will carry out the following steps. If there are any discrepancies or contradictions between the rules and card text, the card text takes priority.

During the Active Phase 「アクティブフェイズ」 (Dub: Unsuspend Phase), the player untaps all of their cards currently in the Rest position 「レスト状態」, turning them Active.

During the Draw Phase 「ドローフェイズ」, the player draws 1 card from their Deck. If during this Phase, the player's Deck is out of cards and the player is unable to draw a card, the player loses the game. The player who goes first does not draw a card during Draw Phase, only on their first turn.

During the Raising Phase 「育成フェイズ」 (Dub: Breeding Phase), the player can choose to perform one of the following three acts only once: [Hatch a Digitama], [Deploy a Digimon from the Raising Area], or [Do nothing].

This act can only be performed if there are no Digimon in the player's Raising Area. The player flips 1 card from the top of their Digitama Deck face-up, and places it in their Raising Area.

Deploy a Digimon from the Raising Area[edit]

No actions are performed, and the player proceeds to the next Phase.

During the Main Phase 「メインフェイズ」, the player can choose to perform the following five acts in any order they wish, and as many times as they are able: [Digimon Entry], [Digimon Evolution], [Tamer Entry], [Use an Option Card], and [Attack]. The Main Phase, and subsequently the player's turn, automatically ends when the Cost paid for an action causes the Counter to move to position [1] or further on the opponent's side of the Memory Gauge. If the Counter is still on the player's side of the Memory Gauge, and the player has no more actions they wish to perform during this turn, they can declare to [Pass] their turn.

In this act, a Digimon Card is made to enter the Battle Area from the player's hand. The player places the Digimon Card they wish to enter from their hand onto the Battle Area in the Active position, and pays their Entry Cost to complete the entry. There is no limit on the number of Digimon that can be placed in the Battle Area, and Digimon cannot attack on the same turn they enter.

In this act, the player evolves a Digimon in their Battle Area or Raising Area.

In this act, a Tamer Card is made to enter the Battle Area from the player's hand. The player places the Tamer Card they wish to enter from their hand onto the Battle Area in the Active position, and pays their Entry Cost to complete the entry. There is no limit on the number of Tamers that can be placed in the Battle Area, and Tamers cannot attack or block.

In this act, players attack using the Digimon placed in their Battle Area.

When the player has no more actions they wish to perform during this turn, they can declare to Pass their turn, passing the turn to the opponent. When a Pass is carried out, the Counter is moved to the [3] position on the opponent's side of the Memory Gauge, regardless of the Counter's current position.

A player wins the game by fulfilling one of the following conditions:

An English-language edition of the Digimon Card Game has been marketed in the Americas, Europe and Oceania since 2021, following a commemorative limited pre-sale launch on November 27, 2020.[1]

Unlike past card games (such as the Digital Monster Card Game), no changes have been made to the game's rules or mechanics, or to its design aesthetic, and the Japanese and English editions remain fully compatible with each other.

The only significant change made in the English localization process is that all of Sistermon Noir and Sistermon Noir (Awaken)'s cards are edited to replace these Digimon with, respectively, Sistermon Ciel and Sistermon Ciel (Awaken), out of concerns by Bandai that featuring the former two Digimon in North American material is unfeasible due to their strong resemblance to Catholic nuns.[2] Both versions of each card, aside from the different species and change of Attribute from Virus (Noir) to Data (Ciel). In order to accommodate for this replacement in international tournament play, Bandai has established a ruling that Japanese Sistermon Noir cards and their English Sistermon Ciel counterparts are to be treated as one and the same, and as having all of the properties, including Card Name, of their counterpart in the other edition of the game.[3] Sistermon Noir is also edited out of the background of some other cards' art, such as BT6-011 Bao Huckmon.

The English edition also changes the designs and layouts of the Parallel Cards in EX-01 Classic Collection to maintain the cards' theme of throwing back to an earlier Digimon trading card game for the foreign audience. Whereas the Japanese Parallel cards mimic the style and layout of the Digital Monster Card Game, the English cards instead mimic its American adaptation, the Digi-Battle Card Game. Changes in the service of this adaptation include:

On occasion, cards from a given Japanese set have been repackaged for the English edition of the Digimon Card Game into different sets and/or released under different circumstances.

Bandai and Shanghai Windo Entertainment have marketed a Simplified Chinese edition of the Digimon Card Game in mainland China since April 2022.[4]

Unlike the Japanese and English editions, Chinese set releases are distinguished from all other set releases with an identifying "C" in their set number.

To date, the Chinese booster set range also differs drastically from the other editions, as each is a compilation of cards from multiple Japanese booster sets.