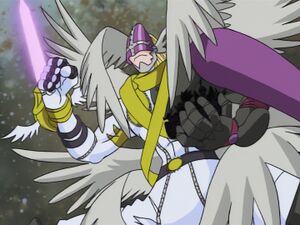 Takeru's Patamon first evolves into Holy Angemon in "The Holy Swordsman, Holy Angemon" to face Piemon after he had changed most of the other Chosen Children and their Digimon into key chains. He retrieves the key chains from Piemon and restores them to normal with his Holy Disinfection ability. After War Greymon and Metal Garurumon weaken Piemon with some help from the other Chosen Children's Digimon they push him into Holy Angemon's Heaven's Gate attack, sealing the Demon Man Digimon away. He faces Apocalymon in "The Final Dark Digimon" but is devolved by Apocalymon's Death Evolution attack followed by Apocalymon destroying the Crest of Hope alongside the other crests to prevent him from re-evolving. But, when Takeru realised it was the power inside of him that gave Patamon the power to evolve, Patamon evolves to Holy Angemon once again in "A New World" to help destroy Apocalymon's claws so that War Greymon and Metal Garurumon could take out his main body thus, defeating him.

In "Coral and Versailles, The Rebel Fight", the power of the Digicores have restored Patamon's ability to evolve to Perfect. In a battle against the Mamemon brothers (Mamemon, Big Mamemon, and Metal Mamemon) and Giromon in Paris, Angemon and Greymon begin to lose until they are super evolved into Holy Angemon and Metal Greymon who swiftly defeat the four Digimon. Holy Angemon then destroys the Dark Tower in Paris.

In "Attack of the Demon Corps", Takeru would super evolve Patamon to Holy Angemon again along side off of the first generations Perfect Digimon but they would lose out to Skull Satamon of the Demon Corps. All of them would give up their Digicores to Daisuke's and Ken's Imperialdramon to allow him to gain access to is Fighter Mode.

In "The Last Armor Evolution", an incarnation of Holy Angemon appears in the world of dreams when Takeru evolved Patamon into all of his possible evolutions. But when it disappeared when they tried to cross over into the Digital World. 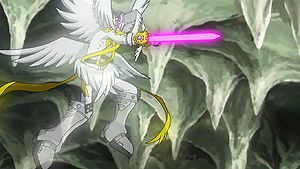 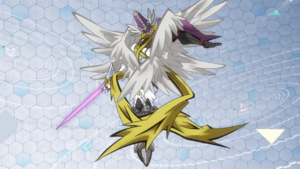 Holy Angemon is the partner of Takaishi Takeru. Patamon takes this form briefly in "Loss" before evolving more in Seraphimon to fight Mugendramon with Hououmon and Herakle Kabuterimon. In "Coexistence", he appears briefly to fight with Meicrackmon Vicious Mode, and last appears in "Our Future" to defeat a Devimon created by the Mysterious Man.

Holy Angemon is the partner of Sebastian. It is also an obtainable Digimon which is evolved from Angemon or Sunflowmon, and can evolve to Seraphimon. It can also be obtained as a collectible card.