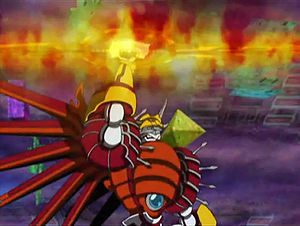 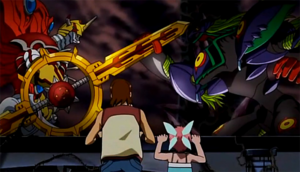 Shine Greymon is the partner of Daimon Masaru. He first appeared after Masaru managed to control his Overdrive DigiSoul, which allowed him to evolve Agumon into his ultimate level. He and Mirage Gaogamon and Rosemon then defeated Bio Thunderbirmon, Bio Coatlmon and Bio Stegomon. Unfortunately, he was accidentally evolved into Shine Greymon Ruin Mode by Masaru, who was furious at Thoma's banishment. This caused him to revert to a DigiTama. After hatching, Masaru gained control of his DigiSoul Burst, and evolved him properly into Shine Greymon Burst Mode to defeat the combined force of Kurata and Belphemon Rage Mode.

Shine Greymon is the partner of Daimon Masaru. He makes his first appearance in "The Golden Insect! The Mystery of Metallife Kuwagamon" , saving Akashi Tagiru and Arresterdramon from one of Quartzmon's floating rock entities. He appears again in "Grand Gathering of the Legendary Heroes! The Play-Offs of the Digimon All Stars!" ‎ where he fights against Venom Vamdemon.

Can be evolved from Rize Greymon at level 41 and evolves into Shine Greymon: Burst Mode at level 65.

Shine Greymon is an obtainable Digimon which is evolved from Rize Greymon. It can also be obtained as a collectible card. 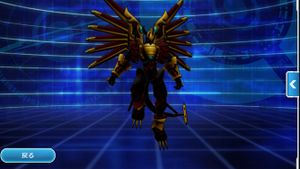