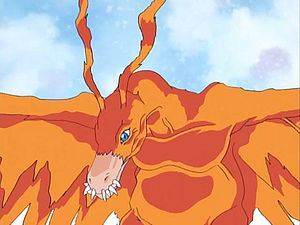 Birdramon is the partner of Takenouchi Sora.

A Birdramon flies in the skies during Tatsuno Tsurugi's first log-in into Net Battle.[52]

A Birdramon is found in the Upper Peak of Great Canyon in a huge metallic bird nest, which can be accessed from the Great Canyon's elevator, attacking the Player for invading its home. Once it got defeated, it will join the Village of Beginnings and open up the Birdra Transport where it will take you to some of the areas you have traveled to already for a reasonable fee though its reccomended to carry an Auto-Pilot because Birdramon will only drop you in these places and you can't return to the village.

Birdramon's Digivolution item are the Flaming Wings which lets any Child Digimon evolve into Birdramon.

Birdramon has 4 possible evolutions depending on the stats and Care Mistakes made:

Birdramon raises its wings and releases an array of flames that char the enemy.

Birdramon is an opponent and an obtainable Red Card.

Obtainable as a collectable card.

Birdramon is a playable character. She evolves from Piyomon and can evolve further to Garudamon.

Evolves from Elecmon. Can evolve to Skull Greymon.