Airdramon appeared for a mere second in Two Great Ultimate Evolutions! Get Rid of the Darkness!. Just after the destruction of Venom Vamdemon, it was seen on a news broadcast that was showing some Digimon attacking other parts of the Real World. 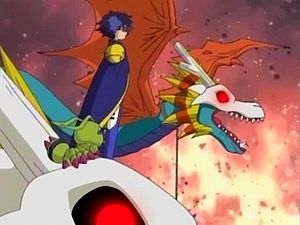 Appeared from time to time during the time Ken was the Digimon Kaiser, as Airdramon were his air escort or transport.

In Duel on the Digimon Meadow a group of Airdramon attacked Birdramon leaving her stranded in the desert until she was captured by Starmon.

Airdramon's wing data was used to help in the creation of Chimairamon.

In New York and Hong Kong, The Battle Royal an Airdramon belongs to an American Chosen Child named Tatum, they assisted to round up Wild Digimon in New York. Several other Wild Airdramon were seen on the China/India border.

Finally in Our Digital World, multiple Airdramon were seen in the final battle against Belial Vamdemon.

An Airdramon could be seen through the rip in the sky that appeared when the Tamers fought Vikaralamon.

When Daimon Masaru first entered the Digital World, a group of Airdramon were seen flying in the sky.

Two Airdramon appear in the Real World as part of Black War Greymon's Raid Boss Battle. The first appeared in the sky alongside a Kuwagamon in VITAL BRACELET Lab, while the second spawned from a vending machine after Bulkmon's Tamer touched it with his Vital Bracelet in BE STRONG WITH YOU.

Airdramon was one of the 99 dragons cut by Zanbamon's Ryuuzanmaru in order to evolve to the Ultimate level[55].

Once the Village of Beginnings has reached a total of 45-50 Prosperity Points and Greymon is already recruited, and the Player talks to Jijimon, outside of his house a brainwashed Airdramon will attack the Player. After its defeated, Airdramon will faint and rest in Jijimon's house. After the Player clears the Infinity Mountain and defeats Mugendramon Airdramon will arrive and rescue the Player from being caught by Analogman. It then opens a booth inside Greymon's Tournament Arena serving as a Fortune Teller though its fortunes don't really mean anything.

Airdramon's evolution item is the Rainbow Horn which lets any Child Digimon evolve into Airdramon. Alternatively, a Birdramon or a Seadramon can become an Airdramon when they sleep, having their Discipline gauge at 100% and zero tiredness. This has a 30% chance of happening, though.

Airdramon has 4 possible evolutions depending on the stats and Care Mistakes made:

Airdramon creates several tornadoes around it and releases them to the enemy in the shape of a flurry of stirring needles.

Aidramon evolves from Piyomon (0-2 DP, 11 EL) and evolves into Aero V-dramon (0+ DP, 21 EL). Its skill is Spiral Twister, consumes 6 MP and is a single-opponent attack.

On one of the servers, there is a sleeping Airdramon in a tower.

Can be evolved from Gottsumon if above level 11 and Dragon EXP above 100, or can be found at Cliff Valley. It cannot evolve.

Can be evolved from Monodramon if above level 21, total EXP 4000, and already have befriended Airdramon. Can evolve to Megadramon if above level 34 and Machine EXP 3600. In Sunburst, you can choose Airdramon in the beginning alongside with Coronamon and Sinduramon if you choose the Speed Pack.

Airdramon is available as a Digimon Medal.

Airdramon is available as a Digimon Card.

Airdramon is available as a Digimon Card.

Evolves from Betamon and can evolve to Megadramon.

Evolves from Betamon. Can evolve to Metal Greymon (Virus).

Airdramon is an enemy Digimon.