Vamdemon is the third major villain that the Chosen Children face. Before the beginning of the series, he captures Tailmon and hardens her heart through his cruel treatment making her into one of his generals. 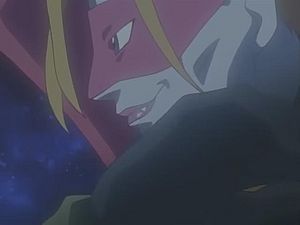 He first sends Pico Devimon to discourage the Chosen Children from awakening their Crests. After some of the Chosen Children do awaken their crests he appears before them to fight them himself. He defeats many of their Digimon but Sora's concern for Piyomon awakens her Crest of Love causing Piyomon to super evolve into Garudamon who held off Vamdemon long enough for the Chosen Children to escape.

He soon sets his eyes on finding and killing the eighth Chosen Child before she would even know she was a chosen child. After devising a spell to unlock the key cards he opens a gateway from his castle to Earth. Using fake Crests of Light that would glow if the eighth Chosen was near he had his minions scour Odaiba searching for her, while he held the real Crest of Light himself. His weakness to sunlight slowed his search at first, but he creates a fog barrier to blanket Odaiba in darkness. After finding out that Tailmon and another one of his minions, Wizarmon, were trying to steal the Crest of Light he figures out Tailmon is Hikari's Digimon partner. Wizarmon attacks him but Vamdemon repels the attack, however, Wizarmon snatches the Crest of Light off of him in the process before Vamdemon throws Wizarmon into Tokyo Bay. Tailmon is captured. 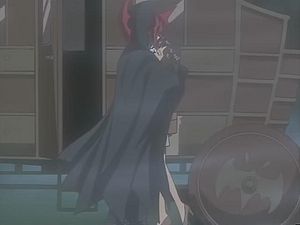 Vamdemon feeding on a victim

After one of his minions, Phantomon discovers that the eighth chosen his Hikari and captures her before Vamdemon. Tailmon denies her being the eighth chosen to protect her, but when Vamdemon has Pico Devimon pull her hair causing her to cry out in pain Tailmon calls out her name.

The other Chosen Children arrive with Wizarmon to save Hikari and Tailmon. In the battle Vamdemon attacks Hikari but Wizarmon jumps in the way acting as a shield. Seeing the sacrifice Hikari's Crest of Light awakens super evolving Tailmon into Angewomon. Angewomon paralyzes the Vamdemon with Saint Air attack and gathers all of the other Chosen's Digimons attack into her Holy Arrow attack killing Vamdemon. 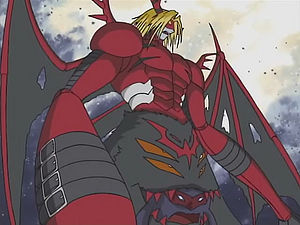 However, Vamdemon begins his resurrection by saving his night raiders, under the command of Pico Devimon, devour his former minions. At six minutes and six seconds after six o'clock, he took on the form of Venom Vamdemon, losing his intelligence and his reason. He imminently swallowed Pico Devimon before rampaging through Odaiba. He dismissed the Chosen Children's Digimon with ease. The Chosen Children then uncover part of the prophecy allowing them to warp evolve Agumon and Gabumon into War Greymon and Metal Garurumon. They do some damage to the monstrous Venom Vamdemon but he quickly recovers and a second face emerges from Venom Vamdemon's abdomen known as "the beast". realizing that it is Venom Vamdemon's weak point they attack it killing him again. 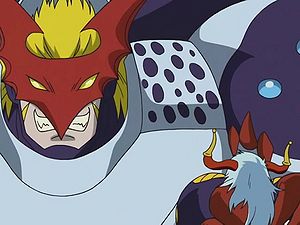 Vamdemon was brought back to life thanks to Millenniumon, who he then served. He fights Akiyama Ryo in Vamdemon's Mansion, alongside a Clockmon and a Kokuwamon, the third boss fought in the game. Defeating Vamdemon freed Ishida Yamato, Kido Jo, Yagami Hikari, Gabumon, Gomamon and Tailmon. He fights Ryo again in Milleniumon's Lair alongside Pico Devimon, the third fight in the boss rush leading to Millenniumon, but is defeated once again.

Vamdemon is the Battle Master of Deserted Island's Battle Arena, which opens up after the credits roll. Yagami Taichi sends the player to deal with him. He wishes for revenge, and the player reminds him of the Chosen Children he fought before, which makes him want to crush him and make him the first victim of his world conquest. Vamdemon plays the Dark Resurrection deck, a Black/Darkness deck with 4 attack, 3 defense and 2 evolution speed which is an incomplete Revived Dark deck. Upon being defeated, he wonders if losing to human children is his destiny and accepts it, but nonetheless demands a rematch to change said destiny.

In Episode 29, "The Sleeping Tyrant! Tonosama Gekomon", Vamdemon first appeared as Pico Devimon asked him for forgiveness after his plan to make the Crest of Purity never glow again failed. Vamdemon then decided to take matters into his own hands, tired of the constant mistakes of his subordinate.

Vamdemon appeared from the sky, breaking free from his coffin as he descended, in front of the Chosen Children for the first time in Episode 30, "Shining Wings! Garudamon". The Partner Digimon except Piyomon, who was wounded from an earlier attack by Pico Devimon, then evolved and fought Vamdemon, but they were easily defeated. Piyomon wanted to join the fight, but Takenouchi Sora refused and grabbed her as she was wounded. Piyomon's cries about how Sora didn't understand her made Sora remember how she acted the same way towards her mother the time she was not allowed to go to a soccer match and how her mother in fact put her before anything else. Piyomon then evolved to Birdramon and attacked Vamdemon with a Meteor Wing, though it was useless. Sora's Crest of Love then glowed, and Birdramon super-evolved into Garudamon for the first time.

Vamdemon is the thirty-sixth obligatory boss of the game, fighting the Chosen Children at the end of Episode 30, "Shining Wings! Garudamon". As in the anime, Birdramon will evolve into Garudamon before the battle for the first time, and will stay in the form for free during the battle. He can deal multiple hits to one party Digimon with Bloody Stream and deal multiple hits to all the Party Digimon and heal himself with Night Raid. Upon being defeated, he drops the Continuous Attack DigiPiece, which allows the equipped Digimon to use the eponymous attack to attack a random target two times.

Thanks to Garudamon's power, the Chosen Children were able to stall until sunrise, which let them escape from Vamdemon.

In Episode 31, "Vamdemon, the Castle of Darkness", inside his castle, Pico Devimon reported to Vamdemon that they had gathered a multitude of soldiers. Vamdemon asked him if they were useful and Pico Devimon was incapable of properly answering him. Tailmon then entered the room, laughing and insulting the soldiers. This annoyed Pico Devimon, but before the situation could escalate, Vamdemon stopped them and asked Tailmon if she had found useful soldiers, which Tailmon did.

Vamdemon confronted his minions, Pumpmon and Gottsumon, in the Main Street of Shibuya in Episode 44, "Pump and Gottsu are Shibuya-type Digimon". He asked them if they had found the eighth Chosen Child, which they hadn't, and if so, why they didn't take the Crests off Ishida Yamato and Takaishi Takeru. In fear, they faked that that was their plan.

Wizarmon and Tailmon returned to Vamdemon's base to recover the true Crest of Light after Yagami Hikari and Tailmon united in Episode 45, "The Bond of Destiny! Tailmon". Wizarmon then found the Crest, but Vamdemon was there and not out until dawn as they thought. Vamdemon asked them if they had allied with the Chosen Children and disparaged Tailmon's eyes, as he always felt they were like daggers pointed his way. They then fought, with Vamdemon easily beating the duo. Vamdemon decided to kill Wizarmon first, but Tailmon challenged him instead, and Vamdemon once again fixated on her eyes, which shone with the light of hope that believed in dreams, which allowed Tailmon to get to where she was today, and she'd make those dreams come true and recover her true self by beating Vamdemon, which made him realize she was the eighth Partner Digimon. With this knowledge, he used his Night Raid on Wizarmon, throwing him into a river. Yagami Taichi and Greymon then arrived to help Tailmon, though Vamdemon wasn't intimidated by them and easily beat Greymon, who then evolved into Metal Greymon, though it made no difference. Vamdemon took Taichi's arrival as confirmation that Tailmon was indeed the eighth Digimon, though Tailmon refused it. Vamdemon decided to use her as bait for the eighth Chosen Child, replacing the Crest of Light Wizarmon took, then left with Tailmon.

Venom Vamdemon Undead appears as a villain in the stage show.