An Evil Ring (イービルリング Ībiru Ringu; Dub: Dark Ring) is a device made by Digimon Kaiser to enslave Digimon with the power of the Kaiser's D-3 which is transmitted by Dark Towers. They share a great similarity with the Black Gears used by Devimon. 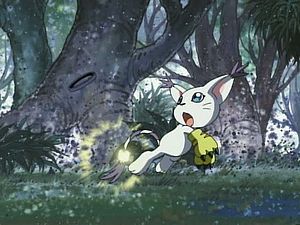 The Digimon Kaiser extensively used Evil Rings to enslave huge numbers of Digimon. The control can be broken by destroying the rings themselves or by taking down whatever Dark Towers are nearby.

Evil rings can generally be destroyed easily enough by a well-aimed attack. It has also been seen that they can apparently be deactivated by the power of a Holy Ring like the one owned by Tailmon... until she went and lost it for the entire series.

Eventually, the Kaiser realized that his Evil Rings couldn't control Digimon more powerful than the Adult Level and modified its design to create a Evil Spiral which, in addition to being able to control Perfect Level Digimon, no longer required a Dark Tower be present nearby.

The Digimon taken over by the Evil Ring includes: