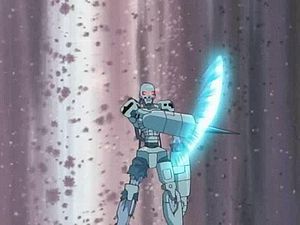 Andromon was the first Perfect-Level Digimon which the Chosen Children met while they were on the File Island. During this time it was controlled by one of Devimon's Black Gears and thus attacked the kids when they entered the factory in which he lived. However Tentomon then evolved to Kabuterimon and freed Andromon from the gear.

Later when the Dark Masters took control over the Digital World, Andromon fought against Mugendramon but it was War Greymon who defeated the Dark Master. Later Andromon helped the Chosen Children fight against Piemon but like most of them was turned into a key chain. However he was turned back by Holy Angemon and then helped to fight Piemon and his Evilmon army.

Andromon made a reappearance as a slave of the Digimon Kaiser controlled by an Evil Ring, fighting the Chosen Children at Full Metal City. It took Yagami Hikari's tears and pleas to give Andromon the power to fight the Evil Ring's influence and finally he destroyed it and the Dark Tower. He later freed and reset the Guardromon in the city as well.

Andromon was a heroic figure who tried to liberate the Gekomon from Orochimon. But after taking too many injuries, he regressed to Guardromon before becoming the partner of Shiota Hirokazu.

Andromon was among the Digimon which met with several X Digimon to discuss about Yggdrasill's plans. However it turned out that Andromon was on Yggdrasill's side and had submitted the infos of the meeting to the Royal Knights. When Omegamon appeared and attacked the X Digimon, he at first was glad but when Omegamon also attacked him and his comrades he realized that War Greymon (X-Antibody) was right the whole time. Andromon was finally killed when Omegamon's attacked ripped War Greymon's Dramon Killer from his arm which impaled Andromon.

Andromon is one of the Digital World's overseers. He is the leader of the resistance against Barbamon's army and the owner of the Machine/Mutant DigiMemory[52]. He put his hope in Tatsuno Tsurugi and Inui Yuu, telling the former about Rize Greymon and how he could break Barbamon's firewall[53], and helping the latter surpass his trauma from Dark Evolving his partner. He met his end in his battle against Chaosdramon after taking his Hyper Mugen Cannon, though not before taking down several Tankdramon.[54]

While deceased, he makes one final appearance during the fight with N.E.O, having left a "trap" inside his Machine/Mutant DigiMemory with his own will inside it. He managed to stop N.E.O, if temporarily, and pass on his hopes to the humans[55].

Andromon serves as the leader of the Factorial Town, where it'll spend most of the time in the Control Roomtrying to operate and solve the problems that are happening around the Town. When meeting the Player, Andromon won't listen to him, saying that he has no reason to be here. Once the Player is blocked by the two Guardromon at the east of the town, the Player must go back to Andromon and ask about the time shifts the Guardromon have, which its at the 12:00 hours, be either noon or midnight. When going there at that time, the Guardromon will be gone for the rest of the game and the Player can explore the areas beyond the Factorial Town. Its later revealed that Giromon is the true source of the problems in Factorial Town and head back to Andromon's control rooms, where it'll apologize for not listening to you, and it'd like to join the Village of Beginnings but it's currently busy trying to fix all the problems caused by Giromon. Come back a few days after and Andromon will join the village, hanging in front of the Birdra Transport during the evening. Recruiting Andromon also lets you recruit the rest of the Digimon in Factorial Town you couldn't before, such as Numemon, Giromon and Metal Mamemon.

Andromon's Digivolution item are the Cyber Parts which lets any Adult Digimon evolve into Andromon.

Andromon can be obtained as a Black Card.

Andromon is one of the many types of Perfect Digimon you can train. Evolves from Angemon (0-5 DP) and can evolve to Seraphimon (0+ DP).

Andromon manages the Fusion Shop, where players can fuse together cards to obtain new ones, or fuse them with their Partners for experience. Each Fusion Shop has its own Andromon, making for a total of three. Andromon can be obtained as a Perfect Black/Darkness Card, whose stats are:

Andromon is an enemy Digimon and is also a brown Perfect level card with 31/29 stats.

An NPC Andromon can be seen walking around the DigiCentral entrance gate.

Evolves from Guardromon. Can evolve to Hi Andromon.

Evolves from Guardromon or Centalmon. Can evolve to Hi Andromon.

Andromon is an obtainable Digimon which is evolved from Geo Greymon, Greymon, or Guardromon, and can evolve to Metal Etemon. It can also be obtained as a collectible card. Its card is part of the Machine Digimon (マシーンデジモン Mashīn Dejimon) set.

Andromon evolves from Guardromon and can evolve to Hi Andromon.