Skull Knightmon is the founder and true leader of Team Twilight, and he forms one half of its main fighting force, Dark Knightmon. He spends most of his time in his DigiXros form, only separating when nescessary. He controlled both Amano Yuu and Amano Nene with his lies and false promises in order to use the power of DigiXros for himself and to create the Darkness Loader. He's also the younger brother of Bagramon, and due to jealousy towards his brother, developed the DigiXros technique and the D5 plan to obtain power. He betrayed Bagramon and took control of his operations, but he was killed by Bagramon for his betrayal.

Skull Knightmon doesn't appear, but is mentioned. The Old Clock Shop Man says to be searching for him in the last episode.

Skull Knightmon is one of the agents of Devimon sent against the Chosen Children, her first appearance taking place in "Roar, Juouken" as a silhouette.

In "The Unbeatable Blue Sagittarius", Skull Knightmon was commanded by Devimon to protect Takeru's Digitama. When Greymon and Garurumon evolve into Perfect Level, Devimon used the power of the dark crystal to evolve Skull Knightmon into Dark Knightmon.

In "Hikari of Dawn", she absorbed Yagami Hikari as a form of sacrifice, in order to release Millenniumon's true form. As Hikari finally managed to meet Tailmon and release her, Dark Knightmon was defeated by War Greymon.

In "Hikari and Tailmon", it is revealed that Skull Knightmon was, in reality, Tailmon's corrupted form, used as a puppet to revive Millenniumon. It resurfaces in the form of a dark aura in the following episode, as Tailmon is affected by the miasma during the fight against Marin Devimon.

In "The Last Miracle, The Last Power", Skull Knightmon was able to manifest himself over Ofanimon and protect her from Abbadomon's attack. 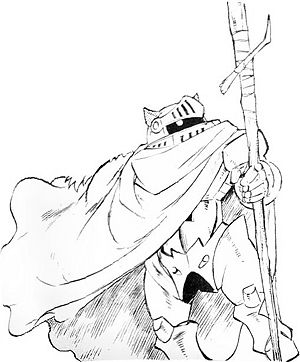 Skull Knightmon (White) in the manga

As in the anime, Skull Knightmon is the founder and true leader of Team Twilight. Also likewise, he spends most of his time in his DigiXros form and is the younger brother of Bagramon. He employs Amano Nene with the promise that he would release her younger sister Kotone if Nene followed his orders. He planned to combine Shademon with Kotone to obtain the Darkness Loader, but Nene interfered and did a DigiXros with Shademon instead. Shademon thus possessed Nene's body and started working together with Dark Knightmon. However, in the end Shademon betrays him and DigiXroses him with Millenniumon to create Zeed Millenniumon. After the defeat of Zeed Millenniumon, Skull Knightmon is almost killed by an Algomon Ultimate, but Bagramon protects him with his life. After these events, Skull Knightmon reforms and turns into a Holy Knight, gaining a white coloring in the process. He goes on to travel the Digital World.