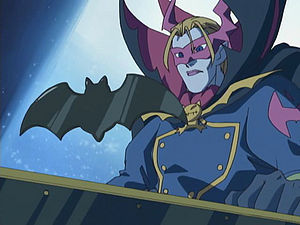 Vamdemon is one of the main antagonists of the series. Killed by Angewomon.

A silhouette of Vamdemon is seen outside the eating tent at the Akiba Market during the Chosen Children's first visit. 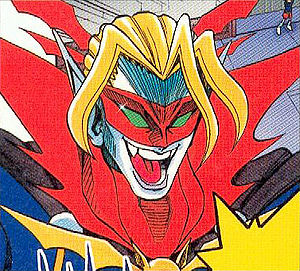 Agumon asks Shinkai Haru if he is the one who lost to Vamdemon 467 times.

Lord Vamdemon guarded the V-Tamer Tag of Shadows in his castle. He and Bakemon used their Nightmare Wave technique to try and pit Tachi and Zeromaru against each other. However, this technique was broken when Taichi had Gabou upload Bakemon's data to Zeromaru to act as a vaccine for the poison. Using his Familiar Bats, he blinded Zeromaru with their venom, but Taichi used himself as bait after telling Zeromaru to aim for his where his voice was, killing Lord Vamdemon.

Vamdemon is an unobtainable Digimon. It is the owner of Dark Lord Mansion, but has recently gone missing from public. Vamdemon is actually in the secret basement of his mansion, starving for "Steak" (血の滴る肉 Chi no Shitataru Niku, meaning Blood Dripping Meat). It would appreciate the help of those who would fetch him one from his refrigerator. Vamdemon will join the city as a Colosseum opponent as thanks, but he once again goes missing after supposedly joining...

Vamdemon is the holder of the Dark 7s card.

Evolves from Devimon and can further evolve to Belial Vamdemon, his special is Night Raid.

Vamdemon is a non-obtainable enemy Digimon which can be found at the 3rd floor of the Dungeon of Darkness.

He is a obtainable evolution of Lalamon.

Vamdemon evolves from Devimon, and can evolve into Venom Vamdemon if he's at level 66 or higher, has 6666 or more Beast Experience, and the player has a Pico Devimon in his/her Party.

Vamdemon is an obtainable Digimon which is evolved from Angemon, Devimon, or Meramon, and can evolve to Beelzebumon. It can also be obtained as a collectible card.

Vamdemon is the boss Digimon of Area 05 and is available to be-friend upon victory.