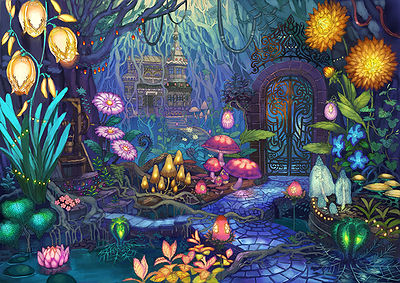 Fluorescent Cave (ケイコウ洞窟 Keikou Doukutsu) is a cave on the west of the Railroad Plains, where Mount Panorama and the Drill Tunnel once was.

Fluorescent Cave is a cave with shining greenery, and connects the Railroad Plains on its east to the Gravel Wasteland on its west. It is actually a giant hollow tree log with greenery growing inside. There are many different glowing plants in the cave, which gives the cave a fluorescent environment. Each part of the cave contains a different colored moss, where different kinds of plants grow. Deep within the cave is a mansion, blocked off by a large gate.