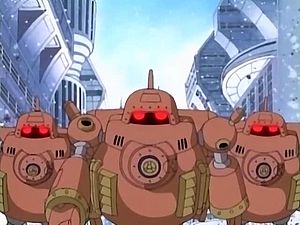 Guardromon under the control of Evil Rings from Digimon Adventure 02 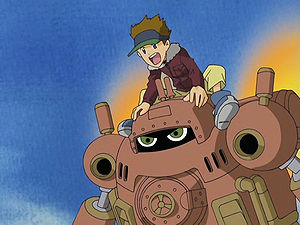 Guardromon is the partner of Shiota Hirokazu.

In "Lilimon Blooms", Izumi Koshiro, Yagami Taichi and Tachikawa Mimi found themselves in an ancient weapon factory. As Koshiro saw through his computer, said weapons factory mass-produced Hagurumon and Guardromon in the past. Mimi and Palmon then found a pile of junk with parts of Hagurumon and Guardromon. Taking pity on one of the Guardromon, Mimi cleaned its head. The Guardromon returned the favour after an Andromon appeared and tried to kill Mimi by blocking his attack. Andromon asked said Guardromon, Guardromon Nº2078, what it was trying to do, but rather than answering, Guardromon looked at Mimi, replaying the footage of her cleaning it over and over, then took a fighting stance before shooting a Destruction Grenade at a crane on the roof, which fell on Andromon. Guardromon then ran away with Mimi and Palmon riding on one of its arms.

Responding to Mimi's need to help Palmon, who had been injured fighting Andromon, Guardromon took both of them to a flooded part of the factory, where Mimi could use the water to help Palmon. It then gave Mimi a flower and, after Mimi asked it if it knew how to get to the surface, offered to guide them. This led them to an elevator, which Mimi believed would get them to the surface. However, before the elevator's door could close, Andromon appeared once again and forced it open. To protect Mimi, Guardromon embraced both her and Palmon then tackled Andromon. Andromon answered by shooting his Gatling Missiles, though Guardromon managed to dodge them. Guardromon then tried to once again use its Destruction Grenade to drop something on Andromon, though he merely batted it away before spinning his hand at high speeds. Guardromon then left Mimi and Palmon on the floor and put himself between Andromon and the girls, blocking the former's Spiral Sword with its body. This proved to be too much for Guardromon, who shut down after the attack. However, Guardromon was not yet dead, and awoke once again to protect Mimi, who was now undefended since Metal Greymon and Togemon were holding pieces of the roof that Andromon had blown up earlier, by grabbing Andromon by the leg. Andromon then stomped on Guardromon, but even as he lost consciousness, Guardromon refused to let go of Andromon while keeping its sight fixed on Mimi. However, it'd end up fully shutting down from the damage, and thus, let go of Andromon. Mimi's anger and sorrow about Guardromon's death then led Togemon to evolve for the first time into Lilimon. After Lilimon defeated Andromon, both of them and the factory itself were covered in moss, and Mimi put a flower on Guardromon's head.

As Koshiro explained afterwards, Guardromon and Andromon were comrades initially, but their alliance was broken by Soundbirdmon controlling Andromon.

After Negamon was finally defeated in "The End of the Adventure", two Hagurumon rotated around Andromon's body, with Guardromon's close, both still covered in moss.

A Tamer-owned Guardromon appears as one of the Digimon in the audience of the Battle Stage when Knight appeared.[49]

Guardromon is one of Aiba Takumi's Digimon, alongside Galgomon and Togemon, evolved from his Hagurumon. All of them evolved together to face the Demons Hackers in their secret base after Takumi messed it up from inside its terminal. In response to their evolution, the blond Hacker released three Growmon, which were easily defeated by Takumi's team. The spiky-haired Hacker then sent in his Cyclomon, who managed to blow the three Digimon away with its Hyper Heat. Takumi commanded his Digimon not to be afraid of Cyclomon, and then Togemon utilized its Chikuchiku Bang Bang to blind it, followed by Guardromon's Destruction Grenade and Galgomon's Gatling Arm to hurt it, and then they finished it by punching it at the same time.

Guardromon is an unobtainable enemy Digimon, found patrolling all over Factorial Town.

Guardromon is an obtainable Adult-level, Black/Darkness card, whose stats are:

Normally colored Guardromon is only seen at save points and as a brown Adult level card with 13/15 stats. Enemy Guardromon are recolors.

Can be evolved from Hagurumon if above level 18 and Stress above 50%, or can be found at Training Mountain. He can evolve to Andromon if above level 40, or Kenkimon if above level 24 and needs to be holding the Digimental of Friendship. He also appears at Cliff Canyon, giving the player a Gear Wheel during Hagurumon's request mission.

Guardromon is an obtainable Digimon which is evolved from Hagurumon, Kamemon, or Tentomon, and can evolve to Andromon, Megalo Growmon, or Rize Greymon. It can also be obtained as a collectible card. Its card is part of the Machine Digimon (マシーンデジモン Mashīn Dejimon) set.

Guardromon is a random enemy Digimon who appears starting from Episode 5, "Lightning! Kabuterimon". It can attack all party Digimon with Warning Laser or deal damage to one Digimon with Destruction Grenade.

A Guardromon serves as the first fight for the Chosen Children in the Colosseum's DigiOne Grand Prix in Sub-Episode 10, "DigiOne Grand Prix", alongside a Mechanorimon, where it also uses Warning Laser and Destruction Grenade.

Guardromon is the boss Digimon of Area 1 and an enemy Digimon in Secret A and Area 4.

Guardromon is an enemy Digimon in Area 2 and Secret B.