In the finales of the Digimon Xros Wars anime and manga, Kudou Taiki and his allies perform a Final Xros that creates Shoutmon X7: Superior Mode by fusing Shoutmon with many other Digimon.

The following lists document every Digimon that is seen to be part of the Final Xros in each story. Due to the significant story divergences between the anime and manga, the Digimon who are seen are not the same between them. 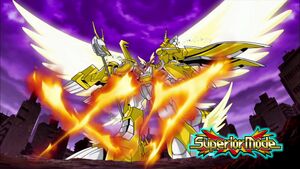 The following Digimon are seen on-screen contributing to the Final Xros:[N 1]

In Xros Songs!! To All The Teens Who Are Chasing After Their Dreams!!, when a horde of evil Digimon is released into the Real World from Zeed Millenniumon when Xros Heart undoes the DigiXros that created it, Xros Heart creates Shoutmon X7: Superior Mode to fight the last remaining one of them, Ultimate Chaosmon. They command "all Digimon" to be part of this Final Xros.

The following Digimon are seen on-page contributing to the Final Xros: