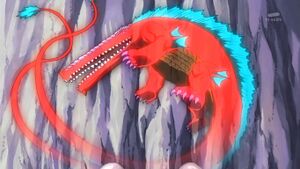 Leviamon from Digimon Savers: Another Mission

Leviamon can only be obtained as a collectible card. Its card is part of the Seven Great Demon Lords (七大魔王 Nanadaimaou) set.

Can be obtained as a Burst Evolution of Mega Seadramon.

Leviamon is an unobtainable Leader Digimon.