Digitamamon ran a restaurant alongside Vegimon. Jo and his partner Gomamon happened on it and ate there, but when it came time to pay, he found they only accepted Dollars (Jo only had Yen), so he was forced to work off his debt. Yamato arrived also and aided in trying to work off the debt.

Pico Devimon met with Digitamamon and paid him to ensure that they didn't leave. This resulted in a battle, but Digitamamon was beaten when Yamato's Crest of Friendship glowed, allowing Gabumon to evolve into Were Garurumon. 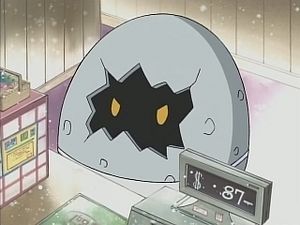 The newer group of Chosen Children stumbled onto Digitamamon's restaurant and ate but ran into the same problem of not having Dollars. He said they would also have to work off their dept but Michael appeared with Mimi and offered to pay the bill. After the group sat down and talked for a bit and Takeru recalled what Digitamamon had done earlier. Digitamamon assured them that he had changed. They only answered with silence and Digitamamon said as long as he believed it himself that's all that mattered. A Gorimon under the control of an Evil Spiral attacked and Digitamamon jumped out in front of its attack recoiling himself back into his shell. The attack sent him flying out of sight. He also fell under the control of an Evil Spiral at some point after that and returned to do battle. The Evil Spiral was hidden inside his shell so it couldn't be seen. The Chosen Children's Digimon had a difficult time breaking through his shell. Mimi tried to reason with him but he pushed her down in annoyance. Miyako yelled at him for doing it and betraying his promise that he wasn't evil. Digitamamon complained she was the one who hadn't believed him before. She admitted that she had been wrong and the Digimental of Purity appeared from beneath the ground and allowed Hawkmon to armor evolve to Shurimon.

After noticing a glimpse of the Evil Spiral during the battle Shurimon threw a shuriken into the visor hole keeping it from shutting then extended another into the shell to destroy the Evil Spiral freeing Digitamamon from its control.

A Digitamamon is one of the Digimon hunted by Tobari Ren.

In VITAL BRACELET Lab, an overlay with Digitamamon's data appears in the eponymous Vital Bracelet Lab, alongside many other data overlays, in front of Palmon and its Tamer.

A Digitamamon is shown as an inhabitant of Light City in Trailmon's sightseeing guide.[47]

A Digitamamon is one of the Digimon who cheer the heroes on in the final fight against N.E.O[48].

A Digitamamon serves as the post-game boss of the Infinity Mountain after you defeated Analogman and Mugendramon, if you go back to where you fought them, you'll see a Digitamamon that's decoying as a Digitama. Speaking to it will result into a battle, and after its defetaed, it'll join the Village of Beginnings, working in the Restaurant, along with Meramon, Tyranomon, Garurumon, Yukidarumon and Vademon, cooking dishes made from Eggs. There's actually a glitch with Digitamamon that can be easily exploited, when its in the Restaurant, and if you feed your Digimon any dishes Digitamamon made, your Digimon will never feel full, although its Stats will increase, meaning that you can keep feeding your Digimon until you run out of BITs.

Digitamamon's Digivolution item is the Mysty Egg which lets any Adult Digimon evolve into Digitamamon.

Digitamamon is an obtainable Variable Move. Its attack, Enigma, reduces the AP of one enemy. It costs 12 VP.

Digitamamon is an obtainable Digimon. It evolves from Wizarmon with 0+ JP (Jogress Point) or Starmon with 8+ JP, and can evolve to Saber Leomon.

Digitamamon is one of the balloons in the Twisted Toy Town stage.

Digitamamon cannot be found as a wild anywhere, but can be born from a Digitama. It can evolve further to Imperialdramon (Black).

Digitamamon is a Non Playable Character.

Digitamamon is an enemy Digimon.

Can be obtained as a Burst Evolution of Gawappamon.