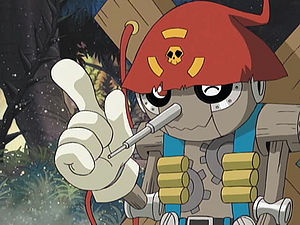 Pinochimon was one of the Dark Masters, a group of four Ultimate level Digimon born of Apocalymon's chaos. While the Chosen Children were in the real world combating Vamdemon, he and the other Dark Masters successfully conquered and reformatted the Digital World, twisting it into Spiral Mountain. He was the leader of the Wind Guardians, and his domain was the forest, in which he lived in a large mansion.

Pinochimon was a spoilt and selfish Digimon, trusting no-one, slaughtering his minions at the slightest provocation, and claiming that everything and everyone should go his way at all times. Pinochimon's initial efforts to combat the Chosen Children relied on trickery, using his toys to move them around the forest and allowing Jyureimon to convince Ishida Yamato to turn against Yagami Taichi, resulting in Yamato, Kido Jou and Tachikawa Mimi departing from the main group. When the remaining five Chosen cornered him, he didn't even attempt to combat them himself, instead setting a squad of Red Vagimon and his animated mansion on them, then fleeing the scene.

As he fled, he slaughtered one of his Red Vagimon servants which attempted to follow him, and shortly thereafter encountered Yamato and Metal Garurumon. Disgusted by his callous murder of the Red Vagimon, Metal Garurumon shrugged off Pinochimon's attempt to control him and killed him with a point-blank Cocytus Breath. As he died, Pinochimon lamented the words of Jyureimon and still failed to comprehend where he had gone wrong.

Pinochimon was a denizen of the Dust Zone. Though initially tricked by Grand Locomon into attacking Xros Heart in exchange for leaving the residents of Dust Zone alone, he had a change of heart and allied with them when Grand Locomon indicated he was not going to follow through on his end of the deal. He later gave Kudou Taiki the Metal Garurumon DigiMemory.

One year later, the same Pinochimon ended up in DigiQuartz and lost control of himself and manipulated several classmates of Akashi Tagiru and Amano Yuu into constructing a powerful robot for his use, Giga Breakdramon. In the ensuing fight with Astamon and the rampant Giga Breakdramon, Taiki and Shoutmon's actions snapped him out of it; distraught with his actions, Pinochimon had Taiki DigiXros him with Shoutmon, enabling him to defeat Giga Breakdramon.

The same Pinochimon appeared in the flashback while the original Chosen Children battle against the Dark Masters.

Pinochimon is an obtainable Variable Move. Its attack, Bullet Hammer, deals damage to one enemy. It costs 9 VP.

Pinochimon is the second opponent of Infinity Tower's third Battle Arena. Upon meeting the player, he asks him if they'll play together, then what they should play, before deciding on "Destroy Everything". Pinochimon plays the Toy Castle deck, a Black/Darkness and Yellow/Rare deck with 3 attack, 4 defense, and 3 evolution speed that reflects how he loves to play but may be out of practice. Upon being defeated, he gets mad at his defeat and lies about the player saying he'd lose.

Pinochimon's attacks are Bullet Hammer, Clean Up and Bigger Liar.

Can be evolved from Mamemon if above level 42 and Machine EXP above 12000, or can be found at Junk Factory. He also gives you a request mission to tell some Digimon that he lied to him at Sky Palace.

Can be evolved from Jyureimon at level 41 and evolves into AncientTroiamon at level 65 (with a Trojan item).

Pinochimon is an unobtainable Leader Digimon.