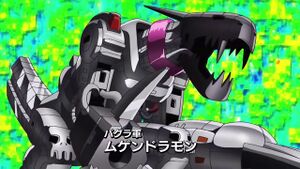 Mugendramon was one of the Dark Masters, a group of four Ultimate level Digimon born of Apocalymon's chaos. While the Chosen Children were in the real world combating Vamdemon, he and the other Dark Masters successfully conquered and reformatted the Digital World, twisting it into Spiral Mountain. He was the leader of the mechanical Metal Empire, and his domain was the city.

Mugendramon pursued Yagami Taichi, Yagami Hikari, Takaishi Takeru, Takenouchi Sora and Izumi Koushiro during their time spent in the city trying to find medicine for Hikari. He forced them into the underground sewer network, where he eventually cornered them and slaughtered a massive number of Numemon attempting to protect Hikari. In response, he was killed by War Greymon.

A Mugendramon was one of the Digimon who evolved to the Ultimate level under the influence of Culumon, in order to aid the Four Holy Beasts against the D-Reaper.

When Ofanimon told the Legendary Warriors about Cherubimon invading Seraphimon's castle, a Mugendramon was seen as part of his beast army.

A Mugendramon is shown when Greymon Super Evolves to Metal Greymon

Mugendramon is the partner of Analogman and the final boss of the game that must be defeated in the final floor of Infinity Mountain. However, after their defeat, Mugendramon and Analogman did not vanished from Digital World but rather banished to Back Dimension, a place that can be accessed each year by entering the entrance of either Ogre Fortress, Dark Lord Mansion, or Ice Sanctuary. After defeating Mugendramon once again, the defeated Digimon is actually just a transformed wild Digimon. As a result, Jijimon will give the player Chain Melon each time it is defeated in Back Dimension.

A dying Mugendramon survived long enough to encounter a Chimairamon and Jogress with it to form Millenniumon. It is the pre-final boss Digimon of Cathode Tamer's main storyline before it fuses again into Millenniummon. When it is accompanied by Millenniummon in the battle, they can learn Apocalymon's Ankoku, which is the strongest of all damaging Variable Techniques.

After gathering all seven 7s cards, it is suspected that the card that has been causing problems in the Digital World, the Bug Card, is in the possession of Mugendramon, who is peacefully living at the top level of Infinity Mountain. Mugendramon is the final boss of the game. It is a Black Card, but is a Perfect level Digimon card as the Ultimate level did not exist at the time of the game's development.

Mugendramon evolves from Skull Greymon regardless of its DP.

Mugendramon is one of Dark Masters that can be battled in the first Infinity Tower's Battle Arena on the 4th round. It is a Black Card, but is a Perfect level Digimon card as the Ultimate level did not exist at the time of the game's development.

Mugendramon is a wild Digimon that can be found in Amaterasu Dum Dum Factory, and is also one of Magasta Royal Guard's Digimon. It can attack twice in a turn with its Machine power.

Mugendramon is available as an Ultimate Red card with 50 AP / 49 HP.

Mugendramon can be evolved from Megadramon if above level 43, or can be found at Freezing Mountains.

An NPC Mugendramon appeared at Chrome Mine as one of Unknown-D's henchmen. He was ordered to kidnap the Digimon researcher Phil, and captured the player who came to rescue Phil. He also defeated Dark Tyranomon who apparently came to "rescue" the player and Phil. Although already in an Ultimate stage, he desires to become stronger than what he is, but as he fallen into Phil's trick, he devolved to Skull Greymon by using researcher Phil's Devolve Chip.

Mugendramon can be evolved from Skull Greymon if above level 55, with 280 attack and you must have befriended Metal Seadramon, or can be found at Process Factory.

Mugendramon evolves from Metal Tyranomon. In order to evolve into Mugendramon, your Digimon must be at least level 47 with a defense of 170 and an attack of 230, but only once you have revived Mugendramon.

Mugendramon can only be obtained as a collectible card. Its card is part of the Crack Team (クラックチーム Kurakku Chīmu) set.

Mugendramon is an obtainable partner Digimon, he can be raised after you battle him on Yggdrasil Dungeon. Evolves from Gigadramon.

A Mugendramon rampaged in the Digital World, destroying multiple Cities and killing countless Digimon, however it was killed by WarGreymon. As it died it swore it would come back for revenge when it was reborn.

Another Mugendramon is the Ultimate form of Shinkai Sara's Bakumon.

Mugendramon is the boss Digimon of Area 07.