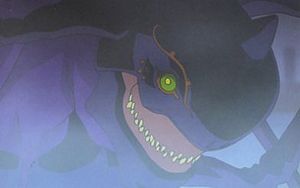 Thousands of Kuramon, under the command of the deceased Diablomon, emerged into the real world. Inoue Miyako sent them a message saying that the Chosen Children would be waiting for them at Tokyo Bay. They gathered there and fused into Armagemon. Taichi and Yamato came with Omegamon and battled against Armagemon, but was defeated. Daisuke and Ken followed up with Imperialdramon Fighter Mode but it became apparent that even he couldn't stand up against Armagemon. The crippled Omegamon gave what strength was left in him to Imperialdramon, transforming him into Imperialdramon Paladin Mode who, with one stab of his sword, slew Armagemon.

An Armagemon was responsible for creating a vortex which threatened to collapse the Digital World. Culumon sealed the vortex, and Armagemon was defeated by Geo Greymon and Gaogamon.

Armagemon is an enemy Digimon and obtainable plug-in card. Its Special Move, Ultimate Flare, deals Virus-attribute damage to all opposing Digimon. It and Diablomon are Zeed Millenniumon's teammates in the final battle.

Armagemon is briefly featured in the game's opening FMV. It is also a boss Atsushi encounters towards the end of the game, shortly before confronting Lord Megadeath.

Upon collecting the four Amaterasu Leaders' badges after the main storyline, the World Champ will use Armagemon as his final Digimon.

Armagemon is a Ultimate-level Black Digimon card with 65 AP / 62 HP.

Appears as a boss Digimon in Core Field, guarding the gate to Chronomon's area. Cannot be obtainable or evolved from any Digimon.

Armagemon is an available Burst Mode Evolution for Diablomon.
It can be unlocked if level 65 or above with the item Black Tentacle.

Alternatively, there is another type of Armagemon known as Armagemon [Conflation], classified as a Variant Type Digimon which is obtained through a series of quests taken from the NPC White Bearded Guru in Dats Center.

Armagemon is available as a Digimon Medal.

Armagemon is the final form of the Keramon the main character and Shoma chase in the post-game episode. After being defeated as Diablomon in the Infinite Cauldron, he scapes and hides inside the Dimensional dungeon in the city. By the time the player finds him he's already evolved into Armagemon. After being defeated he joins the city as the boss of Dimensional dungeon M and thus the player can fight him every day and he will drop chips or evolution stones uppon defeat. This also allows the player to choose Kuramon's digi-egg upon reincarnation.

The events are the same as the original.

Armagemon is an unobtainable Boss Digimon.