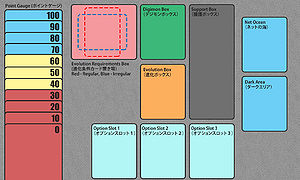 An example of the playing sheet

The Sheet (シート) is the playing mat on which the card game takes place. The playing field is divided into your sheet (自分シート) and the opponent's sheet (相手シート).
The sheet consists of the following fields: 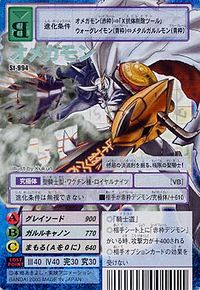 Omegamon's card as an example

Digimon Cards (デジモンカード) are cards depicting Digimon, that are used in-game either to battle or to support. 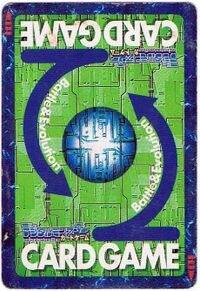 Example of the card's back design 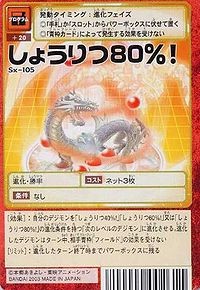 'Winning Percentage: 80%!' as an example

Option Cards (オプションカード) are support cards with various effects, ranging from pushing the battle in your favor to helping out with evolution. They are set face-down from your hand into one of your Option slots during the Preparation Phase, and activated during the activation timing stated on the card. Once set, the Option cards may not be returned to your hand, and may only be discarded or moved to another slot during Preparation Phase. If the card states to set the card face-up, the card is to be set face-up during Preparation Phase, during which the cost stated on the card will be paid, and activated during the activation timing stated on the card.
When an Option card states 'You may only place one of this card in your slots', you may place more of that card into your slots, but can only turn face-up and activate one at a time. 'One of this card' refers to cards with the same card number, thus you may activate two cards with the same name but different card numbers at the same time.

Support Abilities (援護能力) are abilities used by support Digimon that you place in your support box, written in their Information/Coordination Field or Special Abilities Field, marked with a '■' symbol.

Written Abilities (表記能力) are abilities written in the Digimon's special abilities field that are not marked with a '◎' or '■' symbol.

The below rules apply to the standard 'Hyper Colosseum' format. Different rulings exist for different formats, such as 'Ultimate Battle'.

Before the game, select a Level III Digimon card from your deck, and place it face-down in your Digimon Box. Shuffle your remaining deck of 29 cards, as well as shuffle your opponent's, and place your deck face-down onto your sheet to form your 'Net Ocean' - your deck on the playing sheet. Draw the top card of the Net Ocean, and place it face-down without checking its contents onto your Point Gauge, where it will be used to keep track of how many points you have remaining throughout the game. At the start of the game, the card will be placed at the '100' mark, denoting 100 points remaining.

After the above setup has been completed, the game starts, and both players draw 6 cards from the top of their Net Ocean to form their hand. Play a game of rock-paper-scissors; the winner will be first to attack, and the loser will be second to attack. The game ends when either player's points reaches zero. 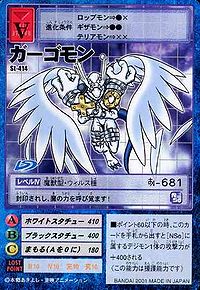 Gargomon's card as an example

During the Preparation Phase (準備フェイズ), each party will carry out the following steps. The player who is first to attack will complete their Preparation Phase first, followed by the person who is second to attack, before moving on to the next phase.

When both players have completed their Preparation Phase, turn both Level III Digimon cards in the respective Digimon boxes face-up.

During the Evolution Phase (進化フェイズ), both parties carry out the evolutions they have announced during the Preparation Phase. The player who is first to attack will complete their Evolution Phase before the second player begins theirs, before moving on to the next phase.

During the Battle Phase (バトルフェイズ), both players' Digimon will do battle. When a winner is decided, the game moves on to the next phase.

During the Point Calculation Phase (ポイント計算フェイズ), both players will calculate how many points they lose due to the battle. The turn ends at the end of this phase.

After the above has taken place, the turn ends, and the next turn starts again from the Preparation Phase. The game ends when either player reaches zero points and loses the game.
The player who won the battle will now become 'first to attack' during the next turn. If the battle ended in a draw, the turn order remains the same as the previous turn.