Lee Jianliang is one of the main protagonists of Digimon Tamers. He is the partner of Terriermon, as well as Lee Shaochung's elder brother.

Jianliang is half-Chinese and half-Japanese: his father (Jiang-yu) is Chinese and his mother (Mayumi) is Japanese. He is the third of four siblings: he has a 17-year-old brother, Rinchei, and a 15-year-old sister, Jaarin, as well as a 7-year-old sister, Lee Shaochung. Along with his father, Jianliang is a Tai Chi student, studying the art of combat under a Sensei who was a good friend of his family. In a moment of self-reflection, Jianliang confessed that he had been an extremely wilful child, and that his numerous siblings had literally forced him to become self-reliant and independent. His study of the martial-arts was also revealed to be a way of asserting himself to stand out amongst the undeniably large family. Once, he got into a serious argument with a neighbourhood child and, presumably in a moment of childish thoughtlessness, injured his "opponent" using his Tai Chi skills - something which he grew to intensely regret later on.

Since then, Jianliang devoted himself to constantly practicing the art of self-restraint, as he feared that he might hurt someone else with his considerable combat skills if he were to lose control of his emotions. The result was that he became a responsible, quiet, and soft-spoken person who always conducted himself with a maturity far beyond his age, but also with a tendency of blaming himself for things that were not his fault at all. Another downside to this was that he had few - if any, at all - friends (though unproven, of course, the series showed that Terriermon and the other Tamers were the only friends he had). When he was first introduced he was practical and knowledgeable yet reserved, always clashing with the seemingly cold and indifferent Ruki, and always willingly helping Takato with digimon-related troubles. As the series progressed, he developed a more open and engaging personality, and learnt that there were some battles that one had to fight to protect the people they loved. 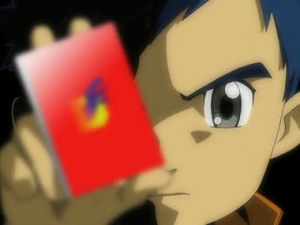 Jianliang received his partner long before Takato. While playing a Digimon computer game, his partner in the game, Terriermon, was defeated by Gorimon. Slashing a Blue Card through his card reader transformed the card reader into a D-Ark, and Terriermon was transported from the computer game into Jianliang's arms. Jianliang realized he had hurt many Digimon through the game, and promised Terriermon that he would never make him battle again. Since then, Jianliang was reluctant to get into fights, developing a pacifistic approach to life.