"Card Slash" (カードスラッシュ; Dub: Digi-Modify) is a technique available to any Tamer in possession of a D-Ark Digivice, using trading cards from the Hyper Colosseum card game to augment and power up their partner Digimon. 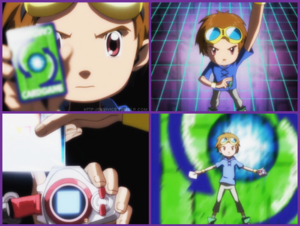 In the Digimon Tamers universe, cards from the card game have a metallic stripe along their side, containing code pertaining to that card's gameplay effects. Normally, this code is to be read by card reader devices used in playing the game by slashing cards into the device[N 1]; however, the D-Ark Digivice, itself sometimes created by slashing a Blue Card through a reader, is able to use the code from the cards to realise augmentations for partner Digimon.

The card game establishes four different categories, which contain different effects and techniques applying to both the card game and their use on actual Digimon.