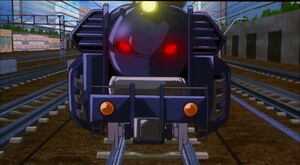 Locomon from The Runaway Digimon Express

A parasitic Digimon Parasimon took control of Locomon and caused it to run wild in Shinjuku, Locomon repeating that it would "keep on running". It later evolved to Grand Locomon. After Parasimon was defeated and Locomon freed, it went back to the Digital World... to keep on running, so it happened to do under Parasimon's control what it did normally.

Locomon is the partner of Funabashi Kiichi. Kiichi met him at a museum for trains when he was admiring the steam locomotives. From there, they traveled to different locations in the world at night, often taking other children along. Locomon was temporarily tempted away by Tobari Ren who promised to be able to make him run faster.

Locomon is available as a Digimon Medal.

Locomon is available as a Digimon Medal.