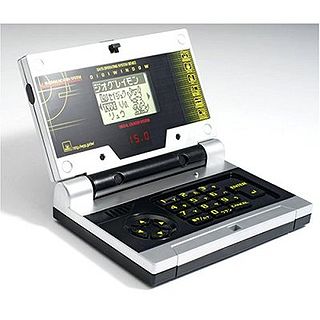 The DigiWindow (デジウィンドウ, Dejiwindou) is based on the small laptop used to analyze Digimon carried around by Thoma H. Norstein in Digimon Savers. It was released on August 30th, 2006.

The DigiWindow is the Digimon Savers equivalent to the Digimon Analyzer. It is a device that allows you to connect your Digivice iC Toy and unlock new Digimon.

If your DigiWindow is in this mode, your selected partner will appear on the screen for about a minute or so. After that, the device will beep, indicating that there is an emergency. After hitting the enter button several times, you will be brought to the screen and choose which emergency you would like to tend to. You play one of ten mini-games in order to obtain a new Digimon:

Digimon come in two groups: DATS: These are the Digimon you can use in mission mode as your partner. Enemy Digimon: Self-explanatory