Tunomon is the partner of Ishida Yamato.

A student at Togemon's school. He was an outcast, because the others considered him freakish because he could evolve. This changed after he saved Caprimon from drowning.

Tunomon is Ishida Yamato's Partner Digimon. This form is briefly shown after Punimon during the Garurumon evolution stock footage. He also had this form during his first meeting with Yamato, before evolving into Gabumon.[27]

A Tunomon appears as a Tamer's Digimon during Tatsuno Tsurugi's first log-in into Net Battle.[28] 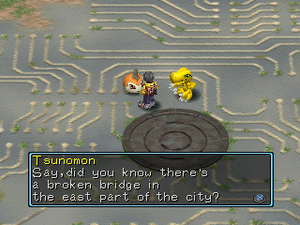 Tunomon telling the Player about the broken bridge.

Tunomon is an obtainable Digimon in Digimon World. Tunomon evolves from Punimon after 6 in-game hours have passed, with no necessary conditions required.

A Tunomon NPC lives in the main Plaza of the Village of Beginnings bouncing around. Its role is somewhat similar to Yuramon's, hinting the player about where to go next as its crucial to recruit some Digimon like Coelamon or Seadramon. Tunomon is also in charge of repairing the broken bridge in the east part of the Village and will be finished once the Player meets Coelamon for the first time and travelled to the Tropical Jungle.

Tunomon evolves after 24 in-game hours have passed and has 3 different evolution choices that can be achieved by clearing these condition requirements:

A Tunomon NPC lives in the village that serves as the hub area of the game, inside the southernmost Digimon House alongside a Yukidarumon and a Kunemon. Like all Digimon House Digimon, it gives Akiyama Ryo tips about Digimon combinations needed for Variable Moves.

Tunomon is also an obtainable Baby II level, None Attribute, Land Type Digimon. It can be found in Mountain Cave.

Can evolve to Gabumon, Gaomon or Dracumon.

Can evolve to Gabumon or Goburimon.

Tunomon is Ishida Yamato's Partner Digimon. As in the anime, he first appears in this form in Episode 1, "Adrift? Island of Adventure!", then evolves into Gabumon before fighting Kuwagamon and stays in that form as his base. Tunomon is not playable, as no Digimon can be fought before Kuwagamon.

To obtain avatar part 4 in Chapter 1 you have to battle a Poyomon and a Tunomon.

Tunomon is a partner Digimon. Can evolve to Gabumon.

Tunomon is an enemy Digimon.