A Tokomon is among the baby Digimon that Piyomon was caring for that ends blown to the human world by a tornado. They all end up in the care of Sayuri and Chika in the Masaru household.

Tokomon is the Partner Digimon of Takaishi Takeru. After being reborn as Poyomon, Patamon evolved into this form before quickly obtaining his Child-level form[33].

A Tokomon is shown as a wounded inhabitant of the destroyed Light City.[40] 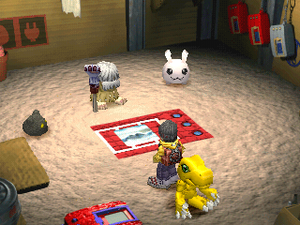 Tokomon is an obtainable Digimon in Digimon World and evolves from Poyomon after 6 in-game hours have passed, with no necessary conditions required.

A Tokomon NPC resides in the Village of Beginnings, inside Jijimon's House, handing out a Starter Kit full of vital items to adventure around the File Island. Tokomon also lectures the player about the Time System of the game, explaining the elapsing of hours, days and years in the game and the clock's function, as months and seconds do not exist in the Digital World.

Tokomon evolves after 24 in-game hours have passed and has 3 different evolution choices that can be achieved by clearing these condition requirements:

Tokomon is an obtainable Baby II level, None Attribute, Land Type Digimon. It can be found in File Island Mansion - Left and Devimon's Cavern.

Can be found at the Forest of Peace. May evolve to Patamon at level 11.

Tokomon is an obtainable Digimon which is evolved from Poyomon, and can evolve to Candmon, Patamon, Pico Devimon, Piyomon, or Tentomon. It can also be obtained as a collectible card.

Tokomon is Takaishi Takeru's Partner Digimon. As in the anime, he first appears in this form in Episode 1, "Adrift? Island of Adventure!", then evolves into Patamon before fighting Kuwagamon and stays in that form as his base. Tokomon is not playable, as no Digimon can be fought before Kuwagamon.

After his death and rebirth, Poyomon evolves into Tokomon once again in Episode 20, "Etemon! The Stage Mounting of Evil", after the feast in the falsely-named Pagumon Village.

Tokomon appears only on a mural in the shrine.

Tokomon is a partner Digimon. Can evolve to Patamon.

Evolves from Poyomon. Can evolve to Patamon, Pico Devimon or Ganimon.

Tokomon is an enemy Digimon.