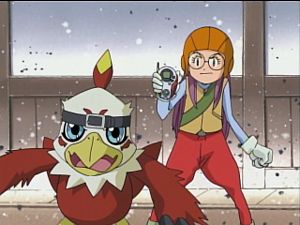 Hawkmon is the partner of Inoue Miyako. Sealed away since ancient times, this small bird is one of the ancient Digimon that are able to Armor evolve.

On the first episode, Taiki is in a dream where a mysterious army is battling against Taiki's Digimon army. Hawkmon is part of that army.

A Hawkmon is one of the Digimon who cheer the heroes on in the final fight against N.E.O[55].

Hawkmoln is a collectable red card with 2/3 stats.

He is no where to be found, but can be reversed evolve from Aquilamon found at Training Mountain. He can evolve to Aquilamon if above level 14 and Friendship above 50%.

Can be devolved from Aquilamon or found at Login Mountain. Can evolve to Aquilamon if above level 20 and attack 105.

Evolves to Aquilamon at level 11.

Hawkmon is an enemy Digimon in Area 2.

Hawkmon is an enemy Digimon.