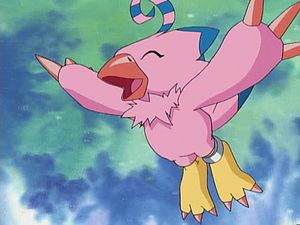 Piyomon is the partner of Takenouchi Sora.

Piyomon is a Digimon that befriended Daimon Chika.

A Piyomon is shown as an inhabitant of Light City in Trailmon's sightseeing guide.[66]

Several Piyomon are some of the Digimon who cheer the heroes on in the final fight against N.E.O[67].

Digitorin is the partner of Rindou Akiho.

Piyomon is the partner of Takenouchi Sora. Piyomon helps the Chosen Children solve the problem in Odaiba playing the role of the Vermilion Bird, Zhuqiaomon of the Four Holy Beasts.

Piyomon appears as an obtainable Child-level and Vaccine type Digimon in Digimon World.

A Piyomon is found in Gear Savannah, at the south of Patamon's screen and the gate to Factorial Town. When the Player meets Piyomon, it will run away from the Player, and every time the Player approaches to Piyomon, it will flee again. To keep it from running away, the Player needs to talk to their Digimon, where they'll try and corner Piyomon. After it was cornered, it will mistake the Player as a Digimon Kidnapper, so the Player corrects it, and will finally join to the city to manage the Item Shop along with Monochromon, Unimon and Patamon. If Piyomon is the third Digimon of the aforementioned ones to be recruited, a Card Machine will appear, and if Piyomon was the first Digimon to be recruited, it'll build the Item Shop instead. When the Secret Item Shop has been unlocked, Piyomon's schedule will coincide that to Mojyamon's, from morning to afternoon.

Tokomon evolves into Piyomon after 24 in-game hours have elapsed only if its MP, Defense and Speed stats are higher as opposed to Patamon's HP, Offense and Brains stat requirements. Piyomon can also evolve into 9 different types of Digimon depending on the stats and Care Mistakes made:

Piyomon spews out a flurry of yellow flames toards the enemy.

Piyomon is an obtainable Red Card.

Piyomon is a collectable red card with 2/2 stats.

It cannot be found anywhere but can be de-evolved from Birdramon found at Mangrove Forest. It can evolve into Birdramon if above level 24 and Friendship above 50.

An NPC Piyomon is seen aside with a girl Tamer Elie near the DigiFarm Shop in DigiCentral. Her nickname is Piyolie.

Biyomon is #032 Digimon, and is a Technical-class Bird-species with a resistance to the Wind element and a weakness to the Thunder element. Its basic stats are 99 HP, 113 MP, 71 Attack, 53 Defense, 60 Spirit, 73 Speed, and 18 Aptitude. It possesses the Speed 2 and Hard Rock 1 traits.

It dwells in the Limit Valley.

Piyomon evolves into Birdramon or Saberdramon. In order to degenerate into Biyomon, your Digimon must be at least LV8.

Piyomon is an unlockable fighter. Her main evolution is Hououmon, and her Super Evolution is Examon. It can also be obtained as a collectible DigiCard.