The Village of Beginnings is the main city of File Island, located on the center of the island. There are many buildings in the city, and in Digimon World it leads to Infinity Mountain and Unwavering Forest.

Located on File Island, it is the birth place of all Digimon, where the data of deleted Digimon is sent and reconfigured into a Digitama, which hatches into a baby Digimon. It is guarded and maintained by Elecmon. Takeru and Patamon wander into the Village of Beginnings in "Adventure! Patamon and I". Elecmon sees them as a threat and initially attacks Patamon. But at Takeru's suggestion the two have a tug-of-war face off instead, ending in Patamon's victory. The rest of the Chosen Children reach the Village of Beginning in "Angemon's Awakening!" as Leomon infected with a Black Gear and Orgemon attack them under orders from Devimon. 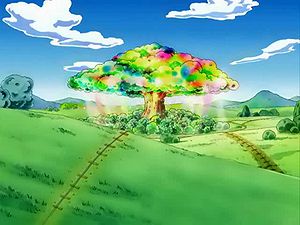 The Village of Beginnings from Digimon Frontier

The Village of Beginnings is where the data of deleted Digimon is sent and reconfigured into baby Digimon. Their data is changed into a Digitama that grows on bushes. This place is guarded by Swanmon. It was absorbed by the Royal Knights (Dynasmon & Lord Knightmon) of Lucemon in order to power Lucemon's resurrection. When Lucemon Satan Mode is defeated, the data is returned.

The Player arrives at the Village of Beginnings when he got sucked into his virtual pet. Jijimon wakes him up and tells him that most of the Digimon have became berserk and left the city, and it is up to Hiro to bring them back.

It is said that one of the Digimon that fled the city flew straight up into the sky, while another went on wandering around other parts of the island. If the city's prosperity rating is moderate, like say 15 or above, the wandering Digimon may just return to the city to seek the answer behind the prosperity. If the city's prosperity rating is very good, like for example 50 or above, it may be enough to attract the Digimon in the sky downwards. 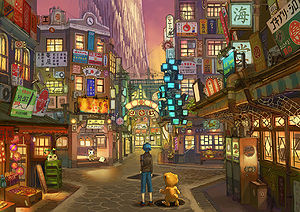 The new Village of Beginnings is a moderately large city with many new buildings. It leads to Railroad Plains towards the south and the west, Signpost Woods towards the east, and the DigiTower towards the north.

Taiga arrives at the Village of Beginnings after his encounter with the possessed Gabumon in the Railroad Plains. The town's elder, Jijimon, tells him that many Digimon have become berserk once again due to problems with the Memorial Stele of each area of the island, and it is up to Taiga and the others to find out the cause behind these problems.

It is a 3rd dimension which costs 20 (or 1 in KDMO) MegaBytes to enter the Village of Beginnings to fee. Its located in the north of the D-Terminal. The next area you can enter is Silver Lake and previous one is D-terminal.

It contains 6 areas to explore.

Takaishi Takeru and Patamon found the Village of Beginnings after they were separated from the rest by Devimon breaking File Island apart in Episode 17, "Adventure! Patamon and I". Finding a bunch of cradles with Baby Digimon (Botamon, Yuramon and Punimon) in them, Takeru realized it was a village of newborn Digimon, and Patamon asked Takeru if they should take care of them. After answering yes, Takeru found a Digitama which had a note saying it should be rubbed. After doing so, it hatched into a Botamon. However, that angered Elecmon, because their coddling could also be bullying, though Takeru just thought that was weird. Regardless, Elecmon then attacked them.

After being defeated, Elecmon acknowledged he misjudged Takeru and Patamon and welcomed them to the Village of Beginnings. Takeru then asked him if he knew how to get back to Infinity Mountain, though Elecmon recommended him not to, as Devimon was there. However, Takeru had to get to him to learn where Ishida Yamato and the rest were. Elecmon told him Devimon would not answer his questions, he'd have to fight him, which Takeru did not want to as he hated fights. Instead, he felt that something would happen if they joined their hearts together. This led Elecmon to go to the Pyocomon village in Gear Savannah, as he thought that, if their hearts united, then File Island would do the same. Afterwards, the Botamon Takeru hatched evolved into Koromon, and everyone congratulated it.

However, this was followed by Leomon arriving. Takeru and Patamon then escaped from him and hid, where Takeru wondered what to do and Patamon answered that they had to get the Black Gear's power off of him, though Takeru did not know how. Orgemon then joined Leomon and threatened to hurt the village if Takeru and Patamon didn't come out. Before they could, however, Leomon found them, though he was stopped from hurting them by the arrival of Ishida Yamato and Gabumon. At the same time, Yagami Taichi evacuated the baby Digimon. Another Black Gear then entered Leomon, turning his skin grey.

Though the Chosen Children were able to defeat Leomon, they could not get the Black Gears out of him. However, Izumi Koshiro and Tachikawa Mimi arrived soon after, and explained how the Digivice could drive out the darkness. Taichi and Yamato followed said instructions, and Leomon went back to normal. Realizing he had no chance alone, Orgemon then escaped.

In Sub-Episode 7, "Where are the Digimon?", which happens after Episode 17, Elecmon worriedly tells Takeru and Patamon that the Baby Digimon of the Village of Beginnings: Botamon, Punimon and Yuramon, had been kidnapped. Takeru, Yamato and Taichi then decided to help him search for them. After they found the babies, Elecmon wondered why they went away from the Village of Beginnings if they were safe and not kidnapped. Returning to the Village of Beginnings, Elecmon asked the babies why they left, and they answered that they left because they were practicing a song in secret to thank Elecmon for taking care of them, which was enough to get Elecmon crying. Elecmon then thanked the Chosen Children for their help and gave them a Skill Release DigiPiece, which gives the equipped Digimon the technique of the same name which undoes Skill Seal in one ally. He then told them they could come back to the Village of Beginnings whenever they wanted.