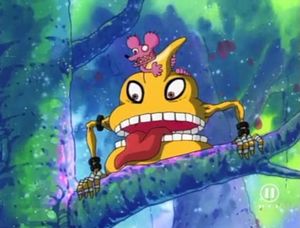 A Scumon is one of the Digimon who cheer the heroes on in the final fight against N.E.O[37].

Scumon appears as an obtainable Adult-level Virus type Digimon in Digimon World. All Digimon in the game (with the exception being Scumon itself) can evolve into Scumon when they have filled their Poop Gauge. The Poop Gauge is filled every time a Digimon potties in the ground without going to the toilet, this action is considered a Care Mistake and the Gauge will be slightly filled. When the Digimon pots in the ground 16 times, the Gauge will be completely full and the Digimon will end up evolving into a Scumon. This evolution, is one of the few that can be reverted back to its original form, when visiting the King Scumon in the Trash Mountain. This is shown as a useful trick that increases the lifespan of the Digimon and makes it easier to achieve evolutions, because it also slightly raises stats.

Several Scumon appear as NPCs inhabiting in the Trash Mountain and being ruled by their King. One Scumon points the Player out about a Fishing Rod laying around the Trash Mountain, and the Scumon next to the King Scumon joins the city, though you have to talk to it first before any of the other Scumon. This Scumon doesn't really do anything other than stacking up Prosperity Points as it only hangs around the toilet of the Village of Beginnings at night.

Scumon has two possible evolutions depending on the stats and Care Mistakes made:

Scumon creates an excrement in its hand and flings it to the enemy.

Scumon is a playable character. He can evolve to Etemon.

Scumon is an enemy Digimon. It is also an Adult level brown card with 11/10 stats.

A Scumon is the leader of a small gang of Digimon including Geremon and Mushmon. It and its friends are deleted by Erasers.

Scumon is an obtainable Digimon which can be evolved from any Digimon by pooping on the floor too many times, and cannot evolve. One can seek the help of Great King Scumon in the Underground Waterway Labyrinth to revert a Scumon back to its original form. Great King Scumon may also instantly change a Digimon into a Scumon. Scumon can also be obtained as a collectible card. Its card is part of the We Are Filth (オレたち汚物 Oretachi Obutsu) set, the Filth Friendship (汚物の友情 Obutsu no Yūjou) set, and the Yellow Filth (黄色い汚物たち Ki'iroi Obutsutachi) set.

Child level Digimon will evolve to Scumon when the poop gauge is maxed.

Child level Digimon will evolve to Scumon when the poop gauge is maxed. Piemon runs experiments, one of which maxes out the poop gauge. This can even effect Ultimate and Super-Ultimate level Digimon who do not poop, and will cause them to randomly become either Scumon or Platinum Scumon.