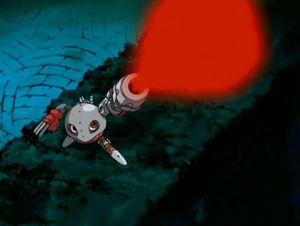 Metal Mamemon was one of the three Mamemon brothers (along with Mamemon and Big Mamemon) who were randomly transported to Paris by Oikawa's Digital Gates. They occupied the Palace of Versailles and began consuming large quantities of wine (fruit juice in the English dub). After Giromon captured Catherine and her Floramon he brought them to the Mamemon brothers to hold her there. Taichi, Agumon, Takeru, and Patamon arrived. After some initial pie throwing Agumon and Patamon evolved to Greymon and Angemon. The Mamemon brothers "took the fight outside" by smashing through the wall with Greymon and Angemon in hot pursuit.

A Metal Mamemon is found at the east of the docks in Factorial Town. To encounter it, the Player must have recruited Penmon in Freezeland, defeated and recruited Giromon in Factorial Town, though it appears at a very low frequency. To encounter it its reccomendable to enter and exit the screen. Once spotted, Metal Mamemon will demand for a battle and after its defeated, it'll join the Village of Beginnings, assisting along with Penmon in its Curling Arena though it appears at a minor frequence and will match you in a curling game.

Metal Mamemon is a Perfect level Land-type Variable Digimon that can be learned by the combination of any Baby Digimon or Agumon + Ver. 1 Digimon (Agumon, Betamon, Tyranomon, Airdramon, or Numemon). Its signature technique, Energy Bomb deals damage to all opponent Digimon. It costs 6 VP.

Metal Mamemon appears along with Mamemon and Giromon as a single opponent called "Mame Trio" in Mount Panorama if the player already defeated Mugendramon for the first time. The powerful and rare V-dramon card can be obtained from "Mame Trio" after winning the card game at least 5 times.

Metal Mamemon is also an obtainable Level Perfect Rarity Card with 1920 HP, 770 Circle Attack, 570 Triangle Attack, 220 Cross Attack with First Attack effect, and does not have a Support Effect.

Metal Mamemon is an obtainable Digimon that evolves from Starmon (6-7 JP) and can evolve to Prince Mamemon (0-8 JP) or Saber Leomon (9+ JP). Its Signature Technique is Energy Bomb, a Counter-type Tech that hits all foes when it is attacked.

Metal Mamemon is the second opponent of Junk City's third Battle Arena. It's extremely confident, saying it never loses. It plays the Bean Tree Evolution deck, a Green/Nature and Yellow/Rare deck with 2 attack, 3 speed and 4 evolution speed, that aims to evolve to Perfect level.

Metal Mamemon is a obtainable Perfect level Digimon to any partner Digimon. It can further evolve to Metal Garurumon and later Saint Galgomon.