A Locomon appeared in the Real World, controlled by Parasimon and runs wild, eventually evolving into Grand Locomon.

A Grand Locomon who frightened many of the residents of the Dust Zone conspired to have Taiki's Xros Loader stolen so he could use it to escape. He had the ability to activate the Zone Transfer function of the loader once reaching a certain speed, but he was betrayed by Pinochimon and subsequently defeated by Xros Heart.

Appeared as a boss Digimon at Junk Factory. Used as the Bad Tamers' transportation, but stopped eternally after defeated by player. 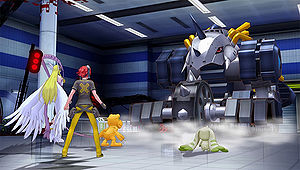