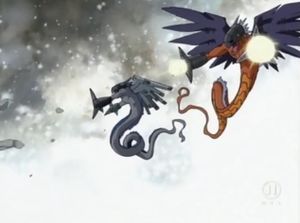 Gigadramon and Megadramon were part of Mugendramons Metal Empire. Together they executed Mugendramons Plan Z by destroying several buildings where the Chosen Children could have been hiding. Gigadramon was attacked by Angemon and disappeared.

While Gigadramon does not appear in the game naturally, it is possible to obtain it via Game Shark and cheat codes, as it appears as a Perfect-level Data type Digimon in Digimon World.

Gigadramon cannot be obtained in any natural way in the game but inner data found that it was originally intended to be obtainable and that even its personal Digivolution Item, the Giga Hand can also be acquired via cheat codes, which if given to any Adult level Digimon, it will automatically evolve into Gigadramon. Other Digimon are obtained in a similar way, those being Panjyamon and Metal Etemon.

Gigadramon is a collectable red card with 28/22 stats.

Evolves from Aquilamon at level 24.

Evolves from Devidramon if above Level 39, Attack is above 194 and has over 4400 Machine Exp.