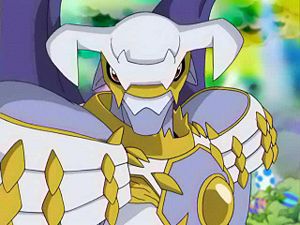 Dynasmon was one of two Royal Knights that served Lucemon, along with Lord Knightmon. They went around the Digital World, scanning the code of many specific areas in order to revive Lucemon. After releasing Lucemon, their own code was scanned by Lucemon.

Dynasmon was seen attacking New York with an army of Knightmon.

Dynasmon is one of the main characters in the game. It used to wield Armamon in the past in order to protect the LS-tou Zone from outside invaders. In the ages of conflict, Dynasmon had the strongest Weapon Digimon as a partner, but it was a Weapon Digimon so powerful that it got consumed by its own power and as a consequence forgot the mission of protect their Zone. Dynasmon did everything to seal an out-of-control Armamon away in Lost Spada, but in the battle, its Digicore got severely damaged.

Subsequently, it rewrote the system of the Earth Fort and used the power of the Capacitator System in order to mantain the data stable, to the point that if Dynasmon went far away from the system, the data would disappear, which could explain why it cannot make contact with Xros Heart at an earlier time point. It then sealed Spadamon's memories in order to protect it from the ROG Organization twisted plans, and so it can make it become the strongest of the Legend-Arms.

It later on instructs Spadamon to remove the protection that it is in Sky Fort in order to restore the system, which makes Dynasmon's data eventually disappear.

Dynasmon can only be obtained as a collectible card. Its card is part of the Royal Knights: Founder (ロイヤルナイツ：始祖 Roiyaru Naitsu: Shiso) set.