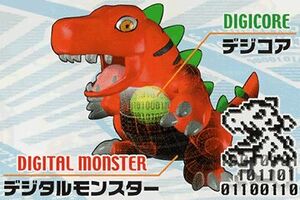 A Digicore (デジコア Dejikoa; Dub: DigiCore), also referred to as a computer kernel[1] (電脳核 Den'noukaku), is the controlling organ of a Digimon that is said to be located in the center of a Digimon's body.[2] Its functions correspond to the hearts[3] and brains of creatures from the real world,[1] and it is the Digimon analog of a soul.[4][5]

A Digicore is a program and data (a collection of numbers and symbols composed of binary code). The Digicore maintains the Digimon's vital functions, and as long as the Digicore itself is unharmed, the Digimon can keep functioning indefinitely regardless of what happens to the rest of its body.[6] However, this means that any abnormalities or damage to its Digicore would be life-threatening to a Digimon, and if a Digimon loses its Digicore, it will be unable to maintain its vital functions and will immediately cease functioning.[6][7] Because of this, Digicores are typically never left exposed, and are protected by skeletons, skin, and other features of a Digimon's body.[1] The only Digimon who have exposed Digicores tend to be either the most powerful Ultimate Digimon (mounting them on the outside of their body, for instance because their body cannot contain their sheer power[8]), or Digimon of the Undead Type (whose bodies have rotted to such an extent that their Digicores are visible).[9]

Digicores are considered the defining feature of Digimon, so entities without Digicores, such as Death-X-mon, cannot be classified as Digimon.[10] However, despite possessing a Digicore of its own, ZERO-ARMS: Grani is not classified as a Digimon.[11]

Digicores sometimes produce heat as a byproduct of functioning. The heat of a Digicore, and its effects on a Digimon's body, sometimes correlates with how passionate and exuberant the Digimon's temperament is. For example, Peti Meramon's wild temperament causes its Digicore to burn intensely.[12] This heat can have an impact on the Digimon's body. For example, the heat of Solarmon's Digicore causes its metal body to be hot to the touch,[13] and the intense burning of Peti Meramon's Digicore causes its entire body to be ablaze.[12] The Digicores of some Digimon, such as Mechanorimon, will overheart if the Digimon is overworked.[14]

In some cases, Digicores can also become weapons themselves, capitalizing on their vast amount of information that they contain.[citation needed]

The information in the Digicore is used to generate the physical body of the Digimon, so the percentage of particular elements within a Digicore determines what and how certain features are expressed in a Digimon and how they evolve, in addition to their pedigree. For example, Dramon-type Digimon (those that bear the "-dramon" suffix in their name) must possess Dragon-factor data in their Digicore; the higher the percentage of that data, the more the shape of their body becomes a Dragon-type.[16][17] Similarly, Gaioumon becomes Gaioumon: Itto Mode when latent oni data in its Digicore is awakened.[18]

Similarly, the size of a Digimon is determined by the amount of data and content embedded in their Digicore, and the size of the texture expressing their body.[1] As such, that data may be subject to being unable to be completely rendered due to technological limitations, especially if it is extraordinary in size.[19]

When a Digimon reaches the end of its life span, it compresses and converts its own Digicore into a Digitama, leaving behind its data to the next generation.[1]

When two Digimon undergo Jogress Evolution, their Digicores are normally totally fused, resulting in a single new Digimon. If the process of Digicore fusion is left incomplete, the resulting Digimon maintains its form in a very unstable state.[20][21]

The Digicores (souls) of sinners that fall into the Dark Area are cast into the sentient crimson flames, El Evangelio, which impose judgment upon and offer salvation to them.[22]

To protect themselves against the effects of Program X, Digimon of sufficient strength are able to alter their Digicores to incorporate Program X itself in the form of the X-Antibody. If X-Antibodies are concentrated within a Digicore at sufficient levels ("normal level" or "level 2"), they actively extract latent data from within the Digicore and use it to trigger X-Evolution, transforming the Digimon into a form that expresses that latent data.[23]

X-Evolution can have a variety of effects on a Digimon's appearance and power, all depending on what and how much latent data there is to extract from the Digicore. As such, if the Digimon in question has already naturally manifested its latent abilities, than the X-Antibody won't have much effect on it and its appearance won't change much.[24][25]

Some Digimon can force the X-Antibody within their Digicores to keep their body functioning even after they have died, in a process called Death-X-Evolution.[26] Death-X-Evolved Digimon of the DORU Series in particular instinctively hunt the Digicores of other Digimon in order to keep their bodies animated.[27][28][29] Death-X-DORUguremon specifically hunts for massive Digicores so that it can evolve.[28]

Unlike any other Digimon species, the Four Holy Beasts and Huanglongmon each have twelve Digicores that orbit their bodies.[9][31][32] In Baihumon's case, these external Digicores manifest its immortality and immense power.[31]

Instead of a physical body, Mokumon conceals its Digicore within a thick cloud of smoke. Since the smoke is generated by the very thing that the smoke is trying to protect, Mokumon is unique in that sense.[2][33]

Candmon is unusual in that its Digicore is not contained within its body, but is instead mounted on the wick on its head, covered in flames. The flames correspond to the healthy function of the Digicore, so if they stop burning, Candmon's vital functions cease. However, it is theorized that the Digicore and flames are the full extent of Candmon's actual body, and that everything else is just a dummy.[3]

Prototype Digimon that originate from before Digimon were discovered have an outdated Digicore Interface on their brow, which allows them to reconfigure the data within their Digicores for such experiments. However, mistakes or carelessness made when reconfiguring the Digicore through the Interface can have devastating effects on the Digicore, even causing it to cease to function in the worst case scenario, so Interfaces are generally no longer used. However, if a Digimon with an Interface receives the X-Antibody, they can use the Digicore Interface to unleash the latent data hidden in the deepest parts of their Digicore.[34] In some cases, the Digicore's very own creativity can be released through the Interface as well, causing new Digimon to be born from the "daydream of a Digicore".[35][36]

Sanzomon has accumulated the pure energy necessary to attain enlightenment in its Digicore. It is hunted by greedy Digimon who want to take this energy from its Digicore, as it is rumored that stealing this energy will confer immortality and heal injuries and terminal illness.[38]

Dukemon: Crimson Mode's Digicore is mounted on its breastplate. The Digital Hazard is sealed inside its Digicore.[41]

Chaosmon is the result of an incomplete Jogress Evolution where the Digicores of the constituent Digimon failed to completely fuse. It has two Digicores that remain completely separate, which makes it unstable and short-lived.[20][21] Ultimate Chaosmon is both the result of an incomplete Jogress and an extremely powerful Ultimate Digimon, so it is unable to store its two Digicores within its body. As a result, its Digicores manifest bare.[8]

Being a Demon Lord type, Beelzebumon's Digicore would, under ordinary circumstances, be consumed by El Evangelio once it is consigned to the Dark Area, However, having assimilated the X-Antibody into its body, Beelzebumon (X-Antibody) is able to suppress the will of El Evangelio without incurring the wrath of the flames.[22]

Avenge Kidmon is the result of the Minus Mind Data overloading the Digicore of a Digimon who had been defeated by Magna Kidmon. This caused it to mutate into a form that strongly resembles Magna Kidmon.[42]

Some Digimon have attack techniques, abilities, or other attributes that are specifically designed to target Digicores, often by piercing directly through its prey's body.

Toward the end of the series, Qinglongmon shares the power of its Digicores with the Chosen Children to grant their partner Digimon the ability to evolve into higher forms.

In "Everyone Advance Out! Imperialdramon", Gennai arrives in the Real World and presents the Chosen Children (except Tachikawa Mimi) with one of Qinglongmon's Digicores. When it shines in response to their Digivices:

In "The Great Free-for-all Fight in New York and Hong Kong!", Benjamin (Gennai's North American counterpart) takes a sample of the power of Qinglongmon's Digicore from Daisuke's D-3 to restore Mimi's Palmon's ability to Super Evolve as well.

The Black Digicore is an artifact that Barbamon uses to enslave Digimon and humans to his will.

Before the Four Holy Beasts slumber to restore the balance of the Digital World they give some of their Digicores to their Deva subordinates so that they could use their power to help defeat the Spiral. Kumbhiramon gives one to Grappu Leomon which allows it to evolve to Heavy Leomon for the first time. Later, Vajramon gives one to Tyilinmon which allows it to evolve to Mitamamon for the first time. Hiiragi Takumi, having learned that the Four Holy Beasts gave the Deva their Digicores, has Gaioumon attack and nearly kill Sinduramon and takes its Digicore by force.

Later, when a Digital Point opens up in the Digital World, Caturamon tries to use one of the Digicores to re-enact their plan from the past, though the other Deva disagree due to the Four Holy Beasts no longer being around to mitigate the damage the distortion would do to the Digital World and Human World as that was the only reason they were able to successfully act out the plan in the first place. Undeterred, Caturamon enlists the help of Ofanimon of the Three Archangels and gives it another Digicore so that it would get more power to try and mitigate the effects of the distortion. Unable to do so however, the effects of trying to control the distortion instead causes Ofanimon's emotions to go out of control, leading it to Mode Change to Ofanimon: Falldown Mode and try to deal with the problem by destroying the Human World, as that is where the Digital Points supposedly originated from. Realising the error of its ways, Caturamon teams up with the Humans and they are able to distract Falldown Mode long enough for Caturamon to retrieve the Digicore, returning Ofanimon back its senses. The two then apologise for their actions, realising the other Deva were right after all and that trying to use that same plan again was too dangerous.

Now having everything he needed – the stolen DigiCore, lots of captured Spiral, and data stolen from the Three Archangels – Eiji is able to put his plan into motion. He combines all of them together and is able to use them open a gateway to the Kernel.

When the Tamers are in the Dark Area, Rasenmon opens a gate to the Kernel so that they could confront Spiral Origin. Spiral Origin sends the Spiral Guardians (G-Spiral-6097, G-Spiral-6098, and G-Spiral-6099) through the other side of the gate to stop them and as the group struggle against them they realize that they need more help to be able to defeat the Guardians. Gryzmon, wanting to be more useful to the group as it couldn't do much whilst still stuck at the Adult level, forces itself to evolve to Cerberumon so that it could open a gate to the Dark Area so that more of their allies can join the battle. After Sandiramon answers the call it allows Cerberumon to use the DigiCore it had been entrusted with to be used to open multiple gates at once which allows all members of the Deva, Royal Knights, and Three Archangels to join the battle. With the group now being much bigger, their combined forces are able to defeat the Spiral Guardians. Spiral Origin revives them however, though the large group of newly summoned allies fight them and allow the Tamers to go to the Kernel.