The Demon Lord Barbamon is the main antagonist of Digimon Next.

He is cruel, calculating and manipulative. 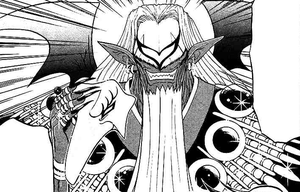 Barbamon, revealing he fused with Yggdrasill.

Barbamon was the force taking over the Digital World. To fulfill his goal of gathering all eight DigiMemories, he gathered a large army and even managed to lure Kahara Shou into joining him.

He commonly appears when addressing Shou, although he tends to scold his other minions, send them on missions or receive DigiMemories. He has a very low opinion of Nanomon, even yelling at him to prove his worth before questioning that of others (at the time, Nanomon was informing Barbamon that Shou had been talking to Mikihara Norn.)[1]

Barbamon is very skilled when it comes to convincing others that they should join his cause (although both cases of this involved dark energy and the people being affected were both angry at the time due to how humans treated their created Digimon) He was able to transform Holy Angemon into Murmukusmon, one of his three Commanders, and convince Shou to join him[2].

Later in the manga, it is revealed that Barbamon is actually combined with Yggdrasill. This is because after Yggdrasill created Norn and sent her to the Human World, Barbamon had a 'discussion' with it on the subject of artificial Digimon and Yggdrasill agreed with Barbamon's arguments (why is unknown, given that Barbamon is a Demon Lord and therefore should be Yggdrasill's enemy.)

Barbamon takes Tatsuno Tsurugi and the others to the deepest part of the Dark Area, and with bth Victory Greymon and Z'd Garurumon refusing to do anything, the situation looks bleak. However, Tsurugi is able to make Victory Greymon obey him and the powerful Digimon kills Barbamon with his Dramon Breaker.

As Barbamon dies, he transfers his DigiMemory and data to N.E.O, allowing it to take on a near complete body[3].