Yggdrasill (イグドラシル, Igudorashiru; Dub: King Drasil), also referred to as "God of the Digital World" (デジタルワールドの神, Dejitaru Wārudo no Kami), is the mysterious host computer that rules over the Digital World on one of the servers on the Network as well as being the name of the system that manages the Digital World.[1]

Originally, "Yggdrasill" was a generic name for the system that was operating on the supercomputer where the Net Ocean was discovered, and later, as a self-defense instinct to eliminate bugs, it began to function without making any judgment between good and evil.[1] According to one hypothesis, it sent N.E.O to be the basis (Adam) for "Next-generation Digimon".[2] It is said that it placed Belphemon's data in a sleep state due to the immense power it possesses, although the truth of the matter is uncertain.[3] It has created an avatar in the form of "Yggdrasill_7D6".[4] Shakamon is rumored to be the being closest to Yggdrasill in the Digital World.[5] Yggdrasill gathered the Royal Knights in order to manage the world,[6] and even modified the code of Craniummon's armor, changing it into Black Digizoid.[7] It seems that its will will eventually lead the Royal Knights to cross servers to Digital World: Iliad and meet the Olympos XII face-to-face.[6] 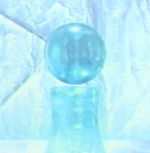 Very similar to the case of Chronicle, it maintained the Digital World and Digimon as part of an artificial life experiment run by an unknown party. Eventually, Digimon multiplied until its memory started to overload, causing the Digital Hazard. It activated Project Ark, using the X-Program to eliminate 99% of Digimon, saving the remaining 1% for follow-up experiments in a New Digital World. However, another 1% of the Digimon population managed to survive by developing the X-Antibody, giving them a resistance to the X-Program and mutating them into newer forms. Yggdrasill dispatched the Royal Knights to hunt down the X-Antibody Digimon, which they did in the belief they were preventing the destruction of the Digital World. However, Yggdrasill was programed to intervene in and administrate problems in the Digital World, but decided that it had become too complicated and needed to be done away with entirely to keep order, so it unleashed a plan to delete all Digimon. Yggdrasill was eventually destroyed by the Royal Knights Alphamon and Omegamon, when they realized that it intended to end the lives of all Digimon.

In Digimon Savers, Daimon Masaru's father Suguru goes on a quest to find Yggdrasill in order to bring peace between Digimon and Humans. 10 years later, Yggdrasill dispatches the Royal Knights to destroy the Human World after Kurata's use of the space-time oscillation bombs causes the Digital World to fall into the Human World.

Himekawa Maki works with Yggdrasil to force the reboot to bring Bakumon back to life. The Mysterious Man and Alphamon work for Yggdrasil, and claim the entity is their ally. The Mysterious Man states the actual plan for the reboot was to revive all the Digimon that had been killed in the real world, and then use them to take over and then destroy the Human World. After JESmon cuts Tailmon out of Ordinemon, Yggdrasil replaces Tailmon's place with new files, causing her to return to the fight. Ordinemon however is killed by Omegamon Merciful Mode, and shortly afterwards, Homeostasis shuts down Yggdrasil.

As Digimon multiplied, Yggdrasill became unable to cope with things, causing the Digital Hazard. It activated Project Ark, using the X Program to eliminate unwanted Digimon, saving the remaining for follow-up experiments in a New Digital World. This New Digital World consisted of three layers for the past, present, and future - Ulud, Versandi, and Skuld, respectively. In Digimon Chronicle, "Cool Boy"[N 1] is a Tamer of the Royal Knights who works for Yggdrasill.

Yggdrasill is the host computer of the Digital World and resides in the System World.

Bagramon remade the right side of his body with wood from Yggdrasill's server tree. It was also mentioned that Yggdrasill's AI had gone berserk in the past and attempted to destroy the human world, which meant it had to be replaced with Homeostasis.

Yggdrasill is the Host Computer of this Digital World. As hinted in the game, it is possible that Yggdrasill was behind the creation of the Mecha Rogue.

Yggdrasill is mentioned by Grimmon in the "Search the Digiarea" quest. It taunts Yggdrasill by claiming its project Ymir will rewrite the entire Digital World.

Kernel believes that the existence of Tamers, Digimon and even evolution is nothing but useless data that needs to be wiped out. The plan of the Erasers was to send all the Data back to where they came from, the "Ancient Tree" (エンシェントツリー) which is the origin of the data and the evolution itself.

The final plan of Kernel is to gather all the data of all the Tamers and Digimon of the Digital World so that all returned to Ancient Tree, then Kernel would take this data and to become one with all that already existed, it also affirms that the power which he was using when he turned the Giga Devast is the power that comes directly from Ancient Tree. So indeed the Ancient Tree is Yggdrasill, then all the data that exists comes from Yggdrasill, just as all the power of the Digimon really belongs to Yggdrasill itself.

It is revealed that Uno, Dos & Tres are Digimon-like beings created by Yggdrasill itself as a result of a project of the old Tamer Union.

Yggdrasill sends a Digitama to the Lower World which is then guarded by Hackmon and the Sistermon and eventually hatches releasing Arkadimon, who will spread the data to form the "Tower of the Seven Deadly Sins", and there would be the fate of the Royal Knights sealed.

The Towers were collecting the essence of all sins, and ultimately give birth to Ogudomon, who is sent by the will of Yggdrasill as a trial to find superior beings. Gankoomon and Bao Hackmon together manage to send Ogudomon into space, and then Ogudomon simply stops acting, whereas even the Royal Knights do not fully understand the will of Yggdrasill.

The Digital World is undergoing a great chaos, a vortex of war never seen before. The cause: the main computer had the task of maintaining order; however "Yggdrasill" suddenly vanished. Due to the lack of rules, the Digimon tried to gain power to become the "Next Ruler of the Digital World".

In the forest, far from the wars, Aegiomon was living in peace with his friends. He was born in Digital World: Iliad and originally was Jupitermon, one of the Olympos XII, but at some point he became Aegiomon and lost his memory, suddenly appearing in the Digital World ruled by a missing Yggdrasill while having to fight for his fate in the battlefield.

Gankoomon is one of the Royal Knights and Hackmon's guardian.

After being sealed and deactivated within the Infinity Mountain for a long time, Yggdrasill reactivates on its own when it feels the danger that the aritificial lifeform called Vitium represents, and reuses the Program X in order to prevent Vitium from destroying the Digital World.

It should be noted that it's highly implied that this Yggdrasill is the same one from Digital Monster X-Evolution.

Several Yggdrasill terminals are fought leading up to the final boss of the game, the main Yggdrasill unit fused with the Mother Eater. Once Yggdrasill is freed from the Eater influence, its normal functionality is restored and it begins repairing the Digital World. Yggdrasill also appears on a Digimon Medal.

The various members of the Royal Knights mention they work for Yggdrasill.

The various members of the Royal Knights mention they work for Yggdrasill.

The various members of the Royal Knights mention they work for Yggdrasill. Craniummon begins to doubt its leadership, which leads Yggdrasill to mind control it and force it to do as it is told. Yggdrasill also appears on a Digimon Medal.

Gankoomon states it works for Yggdrasill.

The captain and the Player, under the guidance of Yggdrasill, were able to defeat Hyuuga Hiroyuki and Fantomon.