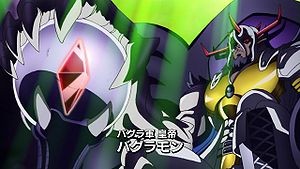 Bagramon is the ruler of the Bagra Empire. He aims to collect the Code Crown in order to take control over the Digital World and used the Death Generals as tools to transform the Code Crown into the Dark Stone in to initiate D5. He is also revealed to be the older brother of Dark Knightmon.

Bagramon is the ruler of the Bagra Empire. He was originally a high-ranking angel Digimon, but was banished after questioning Homeostasis about the existence of evil in the world and challenging God. He then used the remains of the server tree of Yggdrasill to create anew the right side of his body that was burned by God's lightning. He started the Bagra Army in order to destroy the world he thought was built wrong, and to give a merciful end to the humans whose hearts he saw as something fallen into despair with no chance of recovery. At some point before the warfare, he went to ask Lucemon for help, but he refused and simply became a observer to see the consequences of Bagramon's plan. He was also the one who handed Shademon to Skull Knightmon to test his extent of despair. However, the human Generals and their Digimon partners managed to prove to him in the end that hope still exists within the human heart, and he used his last moments to make amends with his younger brother.

Bagramon is only obtainable as a collectible DigiCard.

Bagramon is the leader of the Bagra Army.

Bagramon is an unobtainable Boss Digimon.