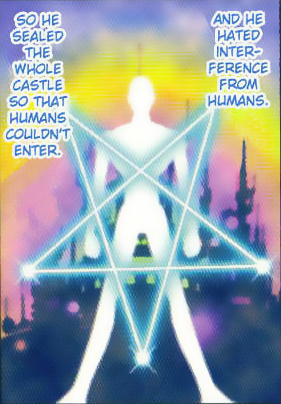 God appearing as a silhouette in Digimon Adventure V-Tamer 01.

God (神 "Kami"?) is an immeasurably powerful being of ultimate goodness[1][2] and infinite love[3] that resides within the Digital World's central "Kernel", which is protected by the Three Archangels and the rest of the Angel-type digimon.[4] The Three Archangels, Seraphimon, Cherubimon, and Ofanimon, were given the duty to execute God's enlightened laws, guard his wisdom, and impart his love and mercy respectively, while also being the ones to command God's Army, which is composed of all Angel digimon.[5][2][4][1] Holy Angemon serves as a speaker for God's "Light" which seeks to preserve the order of the Digital World.[6] Sakuyamon acts as an agent of God's will.[7], while Kongoumon was believed to also be an agent as well in ancient times.[8] Airdramon, a Mythical Animal Digimon, is said to be close to God.[9]

Angel Digimon are positioned near to God,[2] with Seraphimon the closest of them all[5], but because of that extreme, they can easily fall into the opposite extreme of "Wickedness".[2] In fact, Lucemon and Demon (while still a Seraphimon[5]) instigated a failed rebellion against God, alongside many other Demon Lord-type digimon, and were deleted to the Dark Area as punishment.[3][10] Bagramon, one of the Demon Lords who took part, rebelled in rejection of what he considers the "unreasonable justice of the world", and so had the right side of its body ripped away. Although Bagramon would be forgiven if he repents before God, he refused to submit, and instead seeks to replace God's justice with its own "New Justice", with which it will banish God.[11]

After the Son of God, Lucemon,[1] descended to the Ancient Digital World and instigated a conflict between good and evil,[3] to fight against this rebellion, God divided three of its own aspects and gave one to each of his three apostles, who would be in charge of directing God's Army in order to fight against all the Fallen Angel digimon.[1]

These three apostles were: the highest ranking among the "Male Angel" digimon, who became the absolute guardian of the order and justice of God, Seraphimon; the database who holds the vast knowledge of God, Cherubimon, who is also the highest ranking among the "Holy Beast" digimon; and, embodying the deep love of God, the symbol of the existence of the Female Angels, Ofanimon. In other words, he created the digimon known as the Three Archangels.[1] Each of these three Ultimate Digimon has ten wings and and rules on top of the sacred angel digimon,[1] with Seraphimon being the one closest to God among them all.[5] The Army is organized with the Archangel-types having eight wings, the Angel-types having six wings, and the Holy Beast digimon carrying "Holy Rings".[1]

In Digimon Adventure V-Tamer 01, God is mentioned twice. It is said that the castle Demon lives in was originally the home of God, who sealed the castle's entrance from humans because He didn't want humans to interfere.[39] A rumor is also told that God's origin is on top of a floating sky tree, a holy land from where He descended.[40]

Bagramon brought up to Yggdrasill his concern after noticing the human feelings of despair were releasing more dark Digimon and affecting the balance of the Digital World, being eventually banished from the Realm of God.

Pharaohmon vows to God it will not lose when challenged by Atsushi at Protocol Ruins. It loses.

Kernel is an avatar of the creator of the Digital World, acting as the virtual clon of the human God of Digimon. In the continuity of Digimon Story, this person created Kernel as his virtual copy, some time before he died, to take his place and protect the Digital World, something that Kernel eventually didn't by opposing Yggdrasill and destroying the evolutionary tree that rules this universe.

Professor Petrov, as part of the research team of the GIGO Company, wonders at some point whether he has committed an act against God by being responsible for the autonomous uncontrolled growth of the digital lifeform known as Vitium.

A Tokomon in the Village of Beginnings tells Taiga it can hear God's voice, warp evolves to Holy Angemon, and then leaves on a journey to find God.

Huanglongmon is the God of the Digital World.