Lilithmon is a member of the Bagra Army as one of the Three Head Officers. In the second arc, she first get forced on a "vacation" and is later forced to work under Dark Knightmon and Amano Yuu. After Apollomon Whispered merges her with Blastmon and the data of the Hell's Field, she turns into Majuu Lilithmon and starts rampaging until Shoutmon X7 and Beelzebumon destroy her for good.

She appears in a flashback of Kudou Taiki. 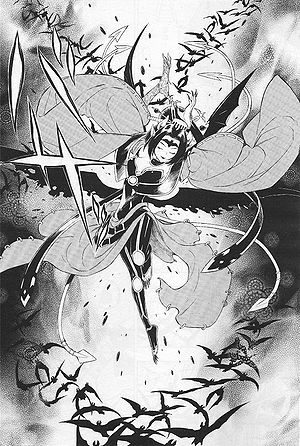 The Lilithmon of the Seven Great Demon Lords betrays her old group for her own profit and joins the Bagra Army as one of the Three Head Officers, and eventually falls in love with Bagramon.

Appears as one of the Seven Great Demon Lords at Destroyed Belt. She is not obtainable or evolved from any Digimon. 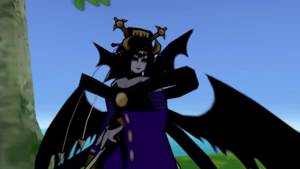 Lilithmon from Digimon Savers: Another Mission

Lilithmon is a boss Digimon as well as an obtainable evolution of Renamon.

Lilithmon is a Mercenary Digimon which can evolve from Bastemon at level 41.

Lilithmon is the evolved form of Lili's partner, Catherine. It is also an obtainable Digimon which is evolved from Lady Devimon. It can also be obtained as a collectible card. Its card is part of the Seven Great Demon Lords (七大魔王 Nanadaimaou) set.

A Lilithmon appears in the Scheme of the Demon Lords chapter (策謀の魔王篇 Sakubō no Maō-hen) as the Demon Lord of Lust. Another Lilithmon is one of Mikagura Mirei's partners, and fights alongside her Ofanimon in the "The Highest Possible Combination" Free Battle at the Colosseum. A third Lilithmon is Lili's partner. It is also an obtainable Digimon which is evolved from Lady Devimon or Lilamon. It can also be obtained as a collectible card. Its card is part of the Seven Great Demon Lords (七大魔王 Nanadaimaou) set.

Evolves from Angewomon by Card Evolution.

Lilithmon can be obtained as a Burst Evolution of Yatagaramon.

Lilithmon is an unobtainable Boss Digimon.

Lilithmon is a boss Digimon in the arcade version of the game[30].